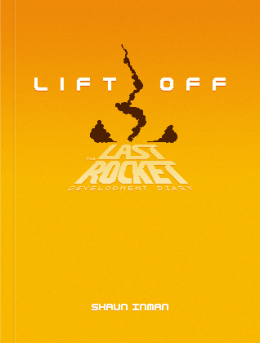 Shaun Inman’s The Last Rocket ($1.99) is a game that you can tell is going to be special inside of about 30 seconds of playing it. We absolutely loved it in our review, and with the various tweaks and fixes the game has seen since release (including Retina iPad support), it’s an even greater effortless recommendation. Gameplay in a nutshell consists of piloting a rocket through 64 rooms filled with all sorts of obstacles. It sounds simple, and it is, but the best part about The Last Rocket is that it doesn’t just use chip tunes and pixel art for the sake of having a “retro" feel. Instead, the entire game, from top to bottom, is just as much at home on the screen of your iPhone as it would’ve been on your NES in the mid-80’s.

The eBook is available direct from Shaun Inman’s site for $9.99. It’s a DRM-free iBooks-friendly ePub which features an exhaustive account of the game’s development including notes, drawings, screenshots, and much, much more. Fair warning though, the eBook is chock full of spoilers, so make sure you’ve played the game first. If you’re the kind of person who loves behind the scenes looks at game development, this isn’t something you should miss.