When you’re looking for a simple, compulsive time waster, do you look for something that lets you grind to your heart’s content, or a game where you can dominate a high score board with skill alone? This is an honest question. DogByte Games’ 8bit Ninja [Free] has a free-to-play model that doesn’t get in the way of simple good times, but it pretty much throws the whole leaderboard thing out the window if you don’t want to pay. Other than that little problem it’s a great way to lose a few hours to that good ol’ craving for just one more game.

Consider 8bit Ninja a companion piece to Halfbrick’s Fruit Ninja. In that game, you are a bodiless ninja with a sword and a penchant for murdering fruit. In this game, you’re a nearly unarmed ninja with a good reason to fear bouncing produce. One’s about the thrill of the attack, the other’s all about avoidance. They make a great pair, but where Fruit Ninja is a one-and-done sorta game that focuses on hitting peak performance, 8bit Ninja holds its big rewards back for the patient player who puts time into its substantial upgrade system. 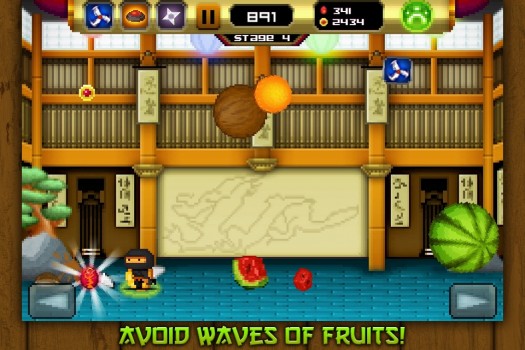 If you have a weakness for levelling things up, 8bit Ninja is going to eat you alive. Just playing lets you level up your ninja, improving his special ability and shrinking its cooldown. You also pick up coins while you play, and those can be used to unlock and upgrade a whole list of powerups. You can equip three of those powerups in a given run. Eventually you can unlock new ninjas with better abilities and level them up too. It’s the sort of grind that goes straight to your head. 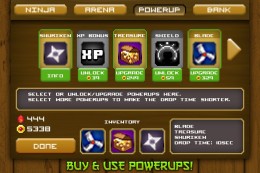 The game is simple: run left and right dodging increasingly aggressive bouncing fruit. Every so often a powerup drops from above. Depending on what you’ve equipped it might give you a few coins or boost your XP, or it might slice up some fruit. Splattered fruits drop coins and the occasional coveted egg.

As we mentioned in our preview, the IAP system is largely inoffensive if you just want to play. You can get by without ever making a purchase and never know the difference. Coins and eggs can be earned by playing, but eggs are quite rare and are more easily acquired with IAP. Purchasing any egg pack has the side effect of removing ads. So far, so good.

You can use eggs then to unlock new ninjas and scenery. They add small bonuses, but nothing outrageous. You can also use them to level up your ninja faster, or swap them for coins to upgrade your powerups. That’s getting a bit dicey from a high score point of view, but you’ll earn your way up there eventually. Things get messy with the last option, though. You can use eggs to purchase one extra life each round if you’re willing to keep plugging in dollars. That’s a pretty big hit to your potential if you don’t want to pay up.

Assuming you’re cool with that situation, 8bit Ninja is otherwise pretty solid. The only real problem is, as with most linear arcade titles, that the early part of the game gets dull and runs get uncomfortably long as you improve. But the game is extremely accessible and its touch controls are great. Between the thrill of random egg drops and the desire to level up and score higher, it’s probably going to get a hold on you.

So ask yourself what you’re looking for. If you want serious competition without hitting the IAP, this probably isn’t the game for you. If you want an entertaining time waster with cute pixel art, go nuts. Just don’t say I didn’t warn you when you’re desperately hunting eggs in the hope of catching up to the rest of the pack.