In a universe in which ninja tournaments aren’t just an elaborate excuse to stage a gory multidimensional melee, there’s an adorable little ninja on his way to castle Shimawa on a hill. Hatted and garbed in his finest eentsy weentsy blacks, this little ninja is on his way to the 200th annual ninja tournament. He doesn’t know it until he gets on the stage, but he’s not skilled enough to win, at all.

And thus little ninja’s failure becomes the premise of another game on mobile platforms that revolves around fruit. And while 8-bit Ninja might roll in one of the most dry and tired design elements in today’s market, it does have something to share: simple fun.

At its core, this is a 2D side-scrolling avoidance game. You’ll control little ninja as he dodges an infinite amount of fruit being fired at him from an upset crowd. The more fruit you dodge, the higher your point value at the end of your session. The game ends when a piece of watermelon, cantaloupe, an orange, or a pineapple hits you as you glide from left to right in the cutesy, though strangely not 8-bit, playing area. I doubt that users will ever receive an emotional rise from any of this, but the action model does a decent job of engaging me. Its immediately accessible and blunt, like an everyday simple pleasure. 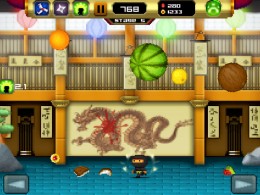 If this sounds like something you’ve played before, it is. I asked developer DogByte where the idea for 8-bit Ninja came from, and unsurprisingly, it’s a product of its time. DogByte loves Falling Balls and Fruit Ninja and wanted to construct something that took elements from both, but iterated in important, though non-surface, areas.

And that’s the thing about 8-bit Ninja: it does have some interesting points of design buried within its cutesy art direction and simplistic play. For one, you’ll never walk into the game carrying tools that directly interact with enemy fruit. Little ninja can, however, pick up and utilize random items that spawn on the map. Weaponry, like blades or shurikens, act like timed but stationary turrets of fruit-slicing fury. Picking up these items up is a clear choice, and one that adds a light tactical flair to the game’s action. And then there’s the progression system, which is as sweet as chocolate.

“The game features multiple unlockable characters each with unique special powers to unleash, multiple arenas with unique extras and a lot of power-ups," DogByte tells us. But that’s selling the progression a little short. As you play, you’ll earn EXP for your character, which seems to ramp up his speed and his special ability, which in the case of little ninja, is a shield. There are two other characters to unlock down the line, each of which boasts different abilities. 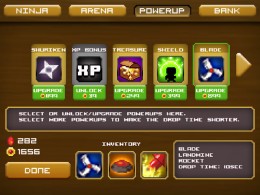 Also, you’ll collect two forms of in-game currency: gems and eggs. Gems can be used to level up those randomly spawned items so they last longer and have greater effects as you play. You can also buy a nifty one-use hat that acts as armor. Eggs, on the other hand, can be used to buy new characters with new abilities, new levels, or even gems. These constituent parts all feed into each other harmoniously, and really bolster that best-in-class one-more-play kind of tone, similar to, strangely, Call of Duty‘s You’ll spend a senseless amount of time powering up my guy and abilities, all in the name of superior stats. This kind of stuff gets in your head in a satisfying way.

Gems and eggs also feed into the game’s free-to-play model, but this title’s brand of functionality appears to be inoffensive. Instead of annoying or nagging, it treats the user as a premium-level consumer from the get-go. The pre-release build of 8-bit Ninja has never made me feel like I need to dip into my wallet to enjoy the progression system and what it offers. Eggs and gems rain freely, though at the cost of ad support. Ads were off in the build I played.

8-bit Ninja might be simple, and the name might be a hair deceiving considering that this plainly isn’t an 8-bit game, but this is definitely something you’ll want to check out later this April when it hits iOS and Android for the price of free. 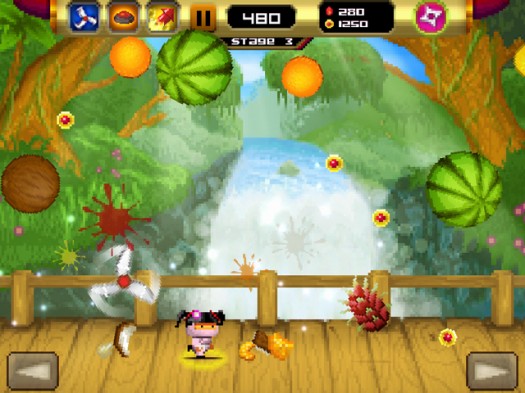 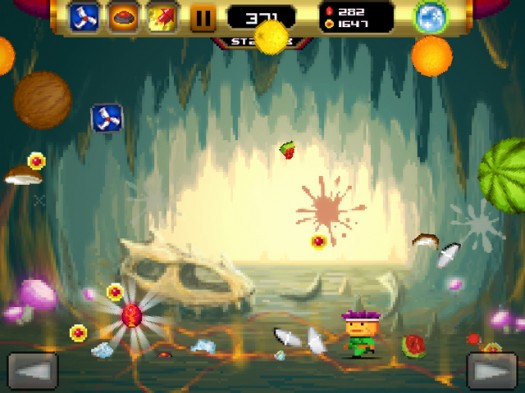