What happens when you take all the block-sliding, switch-flipping, obstacle surmounting goodness of a competent 2D puzzle game and wrap it around a three dimensional, cylindrical frame? As it turns out, you get something like Rinth Island [99¢], of course. A tropical-looking puzzle/adventure with personality to spare, Rinth Island is about as much bang as you can demand from a solitary buck.

Set within the titular landmass, Rinth Island follows the tale of the island’s inhabitants after a moderately cataclysmic storm laid waste to their idyllic lifestyles. Okay, to be fair, things aren’t really as dire as it sounds. Here in Rinth Island, you won’t have to fight against the Four Horsemen of the Apocalypse or sacrifice your bobble-headed self to save your neighborhood. Instead, you’ll spend most of your time running about fetching things like lamps or strange runic blocks. As you might have guessed, the story is merely serviceable but that’s perfectly all right because the puzzles will keep you amply occupied. 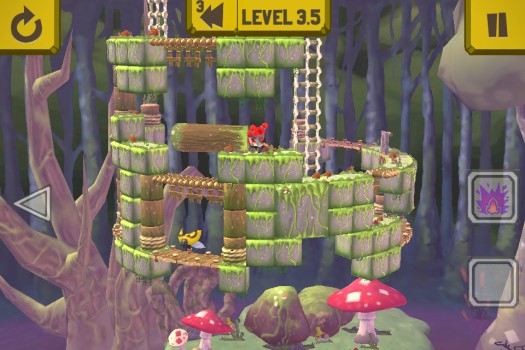 I really, really like what developer Buzz Monkey did with the puzzles. While Rinth Island still would have been a perfectly decent way of spending a dollar, the creative usage of 2D and 3D space is what makes the game so special. To give you an idea as to how it works, try picturing your average 2D level, complete with a panoply of blocks and ladders to navigate, wrapped around an invisible tube.

It’s not an extravagant twist but it’s something that can give rise to some unique situation. Because of how things are structured, not everything will be visible at the same time. Additionally, you’re also going to have to interact with things that exist on the other side of your current platform. Failure to do so can result in you having to reset the level. Before you ask, the answer is no. There is no way you can salvage a mistake. One false step is all it takes unless, of course, you’re willing to invest in the on-off purchase of the ability to undo an error.

Compared to the grandiose amount of stages offered by other games within the genre, the 60 stages currently available in the title can feel slightly lacking. Fortunately, however, a decent amount of replayability can be found in the form of Rinth Island‘s three additional game modes and the slick built-in level editor. Festooned with almost every one of the game’s assets and user-friendly enough to teach to a hamster, the game’s level editor is probably one of the best I’ve seen. As an added bonus, you’ll be privy to information like the number of people who successfully met your challenge and so on.

The controls aren’t quite as slick as the level editor. While you’ll be able to select between a virtual d-pad and a more ‘hands-on’ approach, I personally found myself going for the former. Both felt a tad bit klunkier than I would have liked but the d-pad felt slightly more responsive compared to its counterpart.

And that’s my only real complaint about Rinth Island. Everything else is pretty spot-on. The art style is bright and happy, the music suitably atmospheric. Characters are cute and reasonably well-rendered. For those willing to spend a little extra, there’s a variety of outfits and pets that you can acquire for your chirpy looking avatar. But even without frivolous add-ons, Rinth Island is a solid and satisfying puzzle game with a big unique twist, and is worth having a look at.