Into the whole Chthulu mythos but not that interested in obscenely lengthy, difficult board games? Then this is the perfect time to hop in to Elder Sign: Omens [$3.99 / HD]. The dice game made its original transition to iOS with only one Ancient One, Azathoth. As we mentioned in our review, Azathoth has a habit of devouring the lives and sanity of every team of investigators you bring in until you happen on a great team and some good luck.

This week’s long-awaited update brings in two new Ancient Ones. The rather unimpressive-sounding Yig is included, and Cthulhu is available as an in-app purchase. Yig gives players a better starting point. He’s much less malevolent than Azathoth, both easier to seal away and quicker to wake. He also brings with him a few monsters and adventures that are a little less likely to leave your investigators inconsolable, mindless wrecks, or, you know, dead. 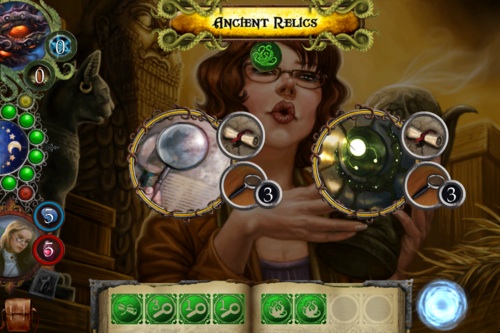 For those already adept at putting down Azathoth, you might want to do it again: you’ll unlock a new investigator that should add a little more variety to your playthroughs. Then you can grab the Call of Cthulhu campaign for a much bigger challenge.

The new campaign takes you back through the museum, but this time with a new goal: discovering the intent of some mysterious intruders (they probably want to raise Cthulhu, just sayin’). Once you do that, it’s off to the Pacific Rim to search for the lost city of R’lyeh and prevent the rising of Cthulhu. You do this by collecting extra investigation tokens, so you’ll have to balance succeeding at adventures and hoarding your tokens.

There are 30 new adventures to be had in the Call of Cthulhu campaign, each more horrifying than the last, no doubt. There are also four new investigators that you can use in any of the campaigns, and a fifth that’s unlocked when you complete Cthulhu. That’s a lot of new ways to play, whether it’s solo or pass-and-play with friends. And as usual, this update brings with it all sorts of fixes and tweaks that should smooth out the cultist-hunting experience, like skippable scene transitions and lowered memory requirements.