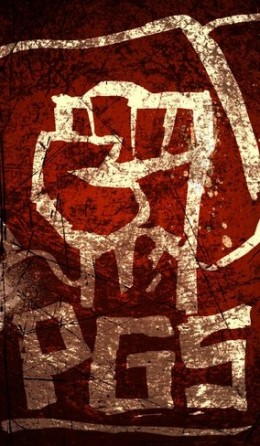 “It’s been an amazing experience," Double Fine founder Tim Schafer told fans via a live stream that celebrated the closing moments of Double Fine Adventure‘s success on Kickstarter. The project generated over three million dollars worth of donations in a month. Double Fine had asked for $400,000. It wasn’t just amazing. It was magical.

Not every studio sees this kind of outcome. Lead artist and the brains behind Playground State, Barry Collins, is walking us through what his studio looks like, and what has happened to his game, after his project failed to receive funding.

Playground State was founded two years ago by Barry and his brother Brad to explore and express the ideas that Barry has had floating around in his head since childhood. If you look closely at its web site, you’ll notice that there’s no physical address. It’s just a collective “willing people" across the globe coming together to build a series of sci-fi titles called Knights. A PC title called Knights: Spiral Islands was to be the first.

Spiral Island became a known project thanks to Kickstarter and a warm reception by PC enthusiast web site Rock, Paper, Shotgun, which featured it in an editorial in February 2011. Spiral Island is described as an episodic online action-adventure game in which you, as a knight in the game’s sci-fi universe, battle evil across the cosmos. Its hook, outside of its UDK visuals, is its lack of boundaries: in one mission, you’ll be hacking and shooting Vikings, in others space bees, mushroom zombies, robots, and large crabs. 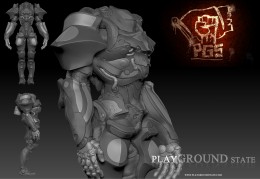 It has the look and feel of something incredible, especially if it were to be expanded as planned. Spiral Island was pitched to potential donors as game design in motion, as it would have seamlessly integrated new scenarios and enemies in a constant steam.

For whatever reason, it didn’t receive sufficient support. The Kickstarter effort ended with a thud later that April. Playground was looking for $10,000. A hair over $1,500 was pledged across 36 serial donators. One pledger, for example, has backed 48 other projects.

It’s easy to see this as a knockout shot, but to Barry, it’s just a glancing blow, and now the team is looking to iOS and its vast audience to continue.

“The lack of funds was frustrating, but it didn’t really kill our ambitions or desire to make this work," Barry tells TouchArcade. In the ultimate show of confidence, the studio grew. It picked up an artist, a musician, a sound designer, and a couple of programmers following the failed attempt at funding.

That Playground is reacting in the exact opposite way you’d expect isn’t lost on Barry, and he explains that the reason is tied into how deeply his core team believes in what the studio is trying to accomplish.

“It’s our baby," Barry tell us. “Amazingly, after maybe an hour or two of rambling with the various team members, they all irrevocably become hooked on the concept and what it has to offer, and slowly but surely begin to own it. Right now we have a team of guys all on the same page and all excited about the small steps as much as the bigger one that will come later — Knights as a whole."

While the team grew, so did Knights. It’s now more than a game: it’s a series of mobile titles based in the same universe that spans multiple platforms and genres. Barry has an idea for several projects, some of which are in early stages of development. The most important is an Epic Citadel-like preview title, built specifically for iOS to show off what his team can do.

But even though the team is growing and excited about the games Barry wants to make, it has a horrible issue: it’s hemorrhaging programmers. It can’t keep one on staff, and this is putting a kink in the size and scope of the Knights games Barry wants to make. Barry says they’re in a spiral of simplification, as no one has the expertise to implement complex content into builds. The lack of a revenue stream is undoubtedly one of the culprits here. It’s also the reason why it’s bothering with a showcase project in the first place, and opening its doors for outsourcing work.

“This constant tug of war is what pushed us to our current goals of producing a very basic, free to download visual demo — a means of walking around a crazy environment full of eye candy and talking to basic scripted actors within the world. This will lay the ground work for follow-up episodes to come afterwords," Barry tells us.

That Knights is blowing up, too, isn’t lost on Barry. He says this game has two goals: to nab exposure and be a launching board. Barry believes it’ll generate new ideas for future Knights games, and argues that the scope in this game is much more manageable than the one he put out there with Spiral Island.

Another game is another iPhone and iPad-specific title called Knights: Arena. This is also a victim of the rotunda of programmers cycling through the studio. It’s an FPS that revolves solely around online play: team deathmatch, capture the flag, and so on. Barry, with a lengthy Internet sigh capping off what he tells us about Arena, says the studio’s goal is to establish a revenue stream as quickly as possible. It needs to hire at least one, dedicated programmer. “But that in itself is a Catch 22," he says. “Need a programmer to make revenue, need revenue to get a programmer."

Playground State’s ability to keep its legs churning in the mud seems unreal, but it’s a human reaction. With a teeth-gnashing kind of pride, Barry plans to continue marching on beyond his studio’s funding failure. He doesn’t just want to make games — he wants to see his dreams realized.

“I don’t quite know how we managed to grow in quality, strength, and numbers. Faith in Knights among the team is stronger than ever today, despite everything," he tells us.

“Knights is one of many projects I dream of making. So this is the blood, sweat, tears part of paving the way to eventually being able to produce these with a real budget and fully paid team. This is it. This is what I love. It’s what I want to do for the rest of my life."

That’s why Barry is up for using Kickstarter again. He has at least two in the works right now. One is for an extensive indie bundle that features developers in the Vancouver area. The other is for Knights: Arena or a single-player variant of that idea, which he wants to launch “at the same time that we launch the free demo, so people can see or play it and discover it that way."

Barry talks about Knights: Spiral Island in his Kickstarter promo.

Spiral Island‘s crowd-funding failure didn’t come without costs in terms of people and revenue. There were lessons learned, though. The first was scalability. “No need to come out of the gate with a massive universe to embark on hundreds of small stories in other universes. A single story is good enough, or if finances and or programming get in the way, as we are discovering, there are still options," he tells us.

“We did not go into this expecting it to be quick and easy, and it has not been quick or easy either," he says.

And let’s say these Kickstarters don’t pan out? Barry isn’t worried. “We will keep pushing along until we are earning revenue on our own, find the right investment deal or get the attention of a publisher that wants to work with us."

“But no matter what, this project will see the light of day, and as a series of mobile games to start."

Towards the end of our Barry conversation, we pressed “pause" so we could ask what makes him so idealistic. His vision for these Knights games still seems almost too ambitious considering the lack of funding. The risk of what will happen if these ideas die could be monumental to the studio’s future and Barry. These games are the realization of his dreams, after all. 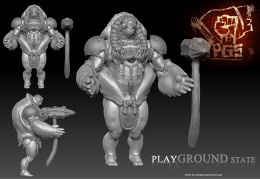 “Knights in general is an extremely ambitious concept,” he says. “It started big and the scope of the games we want to tell based in this setting have been cut back for the sake of getting something to market sooner. “

“The concept of Knights being so grand just means we always have room to grow. We realize that we may only ever produce the Knights preview or only ever get as far as Knights: Arena because there’s a real possibility that Knights is lame and we are all crazy people working away on an idea nobody else likes. “

“For me this would just be a continuation of exactly what I have done for 11 years, which is to just hire myself out to whatever studio wants to pay me, and doing so in mass with others is old hat. The grind of tracking down clients and deadlines, milestones, massive delays in payment and so on… it’s all a part of the job. But, Knights, to me, is a way out of this, to finally get all the ideas my brother and I have been brewing up for decades. It’s time we produce things we want rather than the things that pay the bills.”

Barry says that he likes to focus on what could happen with some success. He could hire programmers, no more lost time on contract projects, and the people he’s surrounded by could be supported.

“I just really hope people want to play a game about the Knights — the ultimate saviors of all things, the definition of heroic. Not a bad bone in their bodies, watching them take on any bad guy we can dream up and throw at them, across all history in any universe and time. I really want to play that game.”

When a Kickstarter fails, it’s not necessarily a catalyst for disaster. Barry is idealistic, and maybe too ambitious, but he’s not a quitter. He’ll keep creating. The success of Double Fine was magical, but the intensity of at least one man who didn’t win big is special, too.

While Barry’s story stands on its own, we are covering something larger here. This is part one of a two-part series of articles. In the next, we’ll introduce you to three more studios who haven’t had the greatest experience on Kickstarter. We’ll also discuss why we don’t normally cover games on the service and why we’re not certain of the long-term viability of crowd-funding sources like Kickstarter.