Fantasy Flight Games is a company that’s known for creating very complicated tabletop games from geek-friendly properties, like A Song of Ice and Fire, Battlestar Galactica, The Lord of the Rings, and the works of H.P. Lovecraft. One of their most popular offerings is Arkham Horror, a game with approximately 700 cards, tokens and markers to keep track of and a play time of up to four hours. Earlier this year, the company released Elder Sign, a game that takes the Lovecraftian horror of Arkham Horror and distills it down to about half the time and only 200 pieces or so.

I love these games, but there’s really no such thing as a quick game of, well, any of them. Between set up, tear down and the inevitable time taken to teach new players and reference forgotten rules, you’re looking at a full evening’s entertainment. So imagine my delight playing Elder Sign: Omens [$3.99 / HD], the first of Fantasy Flight’s more mature games to arrive on the App Store. It’s quick to play, can be learned (mostly) as you go, and can be played solo or hotseat with friends. What’s not to like?

Elder Sign: Omens is harder to explain than it is to learn, but let’s give it a shot. Azathoth, one of Lovecraft’s Great Old Ones, is showing signs of awakening. This would basically be the end of the world, filled with eldritch abominations and mindless gibbering, so you must assemble a team to stop this from occurring. 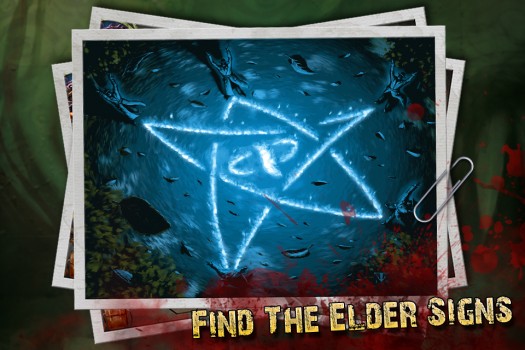 You can choose from a list of 16 investigators to create a team of 1 to 4 members. The investigators all have their own strengths and weaknesses. Some have more sanity, others more stamina, some get more items than others and all have unique abilities to help you on your mission.

Once you enter the museum in which Elder Sign takes place, you’re faced with a selection of missions. Each one is horrifying in its own way, and your investigators risk losing their lives or their sanity by facing them down. In each mission, you roll the dice (proverbially in this game, and literally in the tabletop version) to see if you can match the symbols that come up, things like Terror, Peril and Lore, to the symbols needed to defeat the nameless horror you face.

If you do, you’re well rewarded, earning items for your investigators that help you improve your odds and occasionally Elder Signs. If you don’t, you fail the mission and suffer, losing sanity, stamina and sometimes gaining Doom. If the Doom Track moves up by twelve spaces before you collect the fourteen Elder Signs needed to seal away the Great Old One, Azathoth awakens and all is lost. 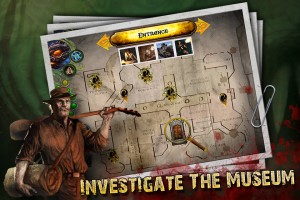 There are a few other details that can effect the outcome of your game. As you succeed at missions you earn trophies that can be exchanged for healing, items or expensive Elder Signs. Time passes on as you take your turns, and at midnight terrible things happen depending on how many monsters or Midnight signs you’ve left on the board. And occasionally portals open to Other Worlds, where the stakes are higher but so are the rewards.

As a result, success in Elder Sign is part luck, part strategy, but it’s certainly weighted toward luck. If you fail at rolling the signs you need, there’s little you can do. But making sure you pick the right investigator for the job, keep them alive and choose the missions you can defeat — therein lies strategy.

For the most part, the transition to digital has been very kind to Elder Sign. Azathoth is the only Ancient One that features — the others and their varied win conditions aren’t present in Omens. But otherwise the game is intact and elegantly presented. The interface is superb, aside from a few small oversights. I would prefer to be able to see what items can do at a glance even when they’re not usable, and I didn’t discover that tapping the title of a mission would bring up more information about it even while you were in the midst of it until I was quite deep in the game. But on the whole, Fantasy Flight has done a fantastic job of making a complicated game simple and easy to play.

They’ve done such a good job, in fact, that you don’t need to worry about learning much at all before you play. I’d recommend watching the tutorials so you don’t get lost, but this is a game you can muddle through and understand within a single playthrough. That’s outstandingly intuitive for this sort of thing. Playthroughs are much quicker than in the tabletop game, too, though not as speedy as they could be — a bit too much focus is placed on fancy but slow scene transitions.

You can play Elder Sign: Omens alone, using up to four investigators to explore the museum. You’re given a local high score when you finish the game, win or lose, and it’s endlessly satisfying to try to defeat that score with different teams and strategies. Alternately, you can play hotseat with friends — assign each person to a single investigator and pass your device around. The game doesn’t change, but it works brilliantly both ways.

Best of all? Win or lose, no one has to clean up the table when you’re done. There’s no overstating how much I’d like to see more of Fantasy Flight’s catalog brought to iOS. If you agree, voice your support in our discussion thread. And do try to keep your sanity intact while you wait.