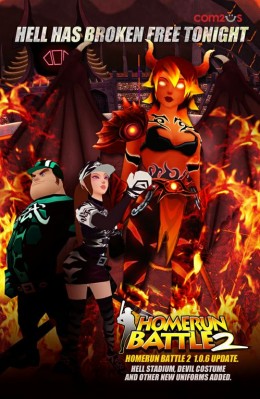 Back in 2009, Com2uS released Homerun Battle ($0.99), which was known as “Baseball Slugger" at the time. We loved it in our review, as it was among the very first iPhone games that featured really slick and seamless realtime multiplayer. Gameplay in a nutshell amounted to getting thrown into a random match with another real person to compete in a home run derby. It was really hard to put down because you could see what your opponent doing in a little picture-in-picture window in the corner of your screen, which only encouraged you to try harder when you see them blast a ball out of the park.

Com2uS followed up Homerun Battle with the sequel Homerun Battle 2 ($0.99). We had a love/hate relationship with the game in our review. We loved the improvements over the original, but hated the insane IAP implementation which was one of the more blatant pay-to-win schemes we’ve seen on the App Store.

Thankfully, Com2uS has listened to player feedback and went back to the drawing board with the balancing of the game. As an established player, it’s a little hard for me to get a feel for how equipment scales as I’ve already got some pretty great gear on my dude. But, if the IAP model Com2uS used previously scared you off, give the game a try again. I’d be very interested in hearing how people feel the power and unlock curve is now. Also, for a limited time the price of the premium version has been lowered to 99¢.

Aside from balance tweaks, the latest update also adds a bunch of new equipment to work towards and a Hell-themed stadium.

In other Com2uS news, they’ve also just released a new free to play game, Magic Tree (Free). When I tried the game it gave me a Frontierville-like vibe, but it comes packed with 3D almost Animal Crossing-ish visuals. Check out the trailer:

So, consider downloading that if it seems interesting. More importantly though, give Homerun Battle 2 another shot. Game balance and IAP was a major point of contention on our forums. If you were one of those people miffed by this game originally, it’s worth a second look now.