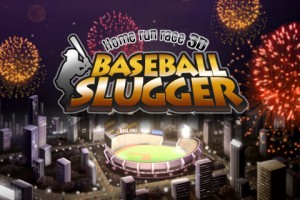 You can almost hear the groans coming when you start talking about a “casual" sports game. Somewhere along the way, the term “casual" has become a euphemism for “crappy mini". But Com2US’s Baseball Slugger [App Store] is a notable exception and is a really fun game for both sports and non-sports fans alike.

The game is structured as a home run derby. You must hit as many home runs as possible before a designated number of outs is achieved. Simple goal, but Baseball Slugger shines in 3 different areas that make it a great game: 1) gameplay mechanic 2) online realtime multiplayer 3) upgradables.

The make or break aspect of all games is the control mechanic, and sports games are particularly sensitive to this aspect. In the end you are substituting some combination of buttons and directions to emulate an actual batting swing. We’ve seen various types of controls attempted, but Baseball Slugger’s system seems to work best. Batting uses the accelerometer to aim your bat at the pitch. Different types of pitches will break differently and you need to be able to anticipate and properly aim at where the ball is coming. When the moment comes, you simply tap on the screen to swing. Tap too soon or too late and your ball will fly into foul territory. 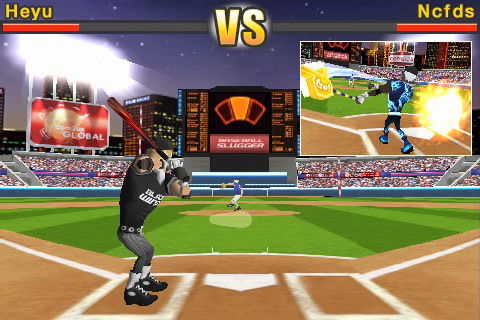 It’s a simple mechanic and one we’ve seen before but it adds enough individual player skill into the mix to make it enjoyable and something you can actually work on improving.

Next, Baseball Slugger offers real-time head-to-head online multiplayer over both Wi-Fi and Cellular connections. You can pick “Matchup" from the menu and find yourself a random player to compete against. Baseball Slugger also contains a “rival" list in which you can add your friends. (A list of TouchArcade players has already been started in the forums). Different matchup rooms offer different skill sets so you can try to match up with someone that’s ranked about the same as you. 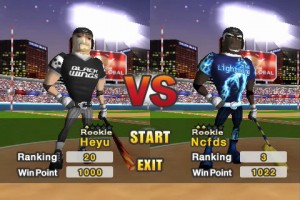 Once the match starts, your opponent’s game is inset into the top right of your screen (like picture-in-picture). The goal is to get your score bar filled before your opponent. Home runs, obviously, fill the bar faster. You can keep an eye on your opponent’s progress and also see his hits and misses in real time. Special balls (gold balls, multipliers, etc…) appear at random times and can help boost your score and at least one ball can directly affect your opponent (blurs his/her perspective) — that is, assuming you can hit the home run. The match ends when the first player fills their score bar. Multiplayer really adds a lot of long term playability to the game.

The final nice component to the game is an extensive upgrade system. The official count is 114 items that can be used to equip or customize your player. This can include physical changes such as hair, face, skin, uniform, shoes etc… but also equipment upgrades such as bats, gloves, and helmets. Besides making you look more intimidating, the upgrades also improve your abilities which should improve your game performance. The only way to earn these items is to keep playing and earning more gold with each game.

This video shows me playing very poorly, but should give you a taste of the game. (It’s hard to play through a video camera LCD and I kept trying multiple times to record a respectable online match, but it was not to be). Arcade (single player) and Matchup (multiplayer) are shown:

All these together make for a surprisingly fun game that could last some players a very long time. The game’s also been really well received by our forum members.