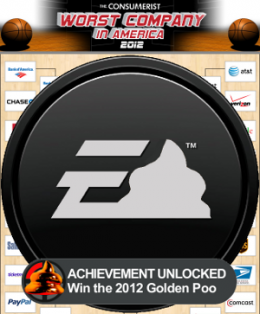 If you’re not familiar, The Consumerist is a consumer affairs blog and watchdog organization which is part of the Gawker network Consumer Reports. It’s a daily read of mine as they usually cover things that help you avoid shady things companies are up to, feel-good stories of customer victories, and other relevant things. Anyway, long story short, The Consumerist does a yearly reader poll to determine the worst company in America. In previous years, AT&T, Wal-Mart, and numerous banks were all contenders.

This year the final two companies were Electronic Arts and Bank of America. EA won with 64% of the vote, with The Consumerist citing EA’s overall “greed," via excessive DLC, buggy games, and acquisitions. EA was quick to respond to the results, via Kotaku:

We’re sure that British Petroleum, AIG, Philip Morris, and Halliburton are all relieved they weren’t nominated this year. We’re going to continue making award-winning games and services played by more than 300 million people worldwide.

Personally, I’m with EA on this one. How silly.