Behold! The kingdom of Kameloot! A great land plagued by literature-loving rats, ruffians, maddened herbivores and stupefyingly high taxes. It is here that Battleloot Adventure [99¢/HD] takes place. In this turn-based strategy/RPG hybrid, you’ll be taking command of a motley crew of mercenaries.

Unlike most titles within the genre, Battleloot Adventure will not have you galloping off to the castle in order to decapitate the state dignitaries. I mean, the local oppression is sort of what keeps you rolling in the dough. While, in theory, your purpose in life is to assist the city you’ve sworn fealty to in its attempt to win the ‘Grand Gossip Notoriety Prize’ , you’re really just in it for the gold.

As you might have guessed already, Battleloot Adventures is not a game that takes itself too seriously. It’s a game plagued with sheep, after all. Black sheep. Red-eyed, rabid-looking sheep. Be-tentacled, flatulent purple sheep. Battleloot Adventure has a sheep for all occasions. Can you honestly imagine something like this being grim and dark? 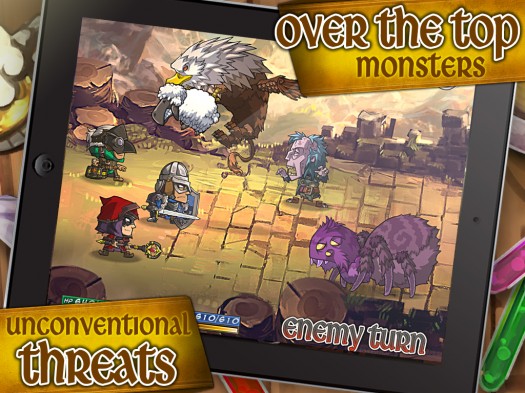 The bright, cartoony art style certainly enforces the light-hearted atmosphere. Characters are well-drawn and vividly colored albeit often encumbered with slightly overlarge heads, something that may not appeal to those who do not enjoy Japanese anime. In contrast, the watercolor backgrounds look as though they deserve a spot in a children storybook somewhere.

Now, let’s talk about the gameplay. Combat in Battleloot Adventure is wonderfully simple. To attack, you tap on your target. To defend, you tap on yourself. To utilize an item or a skill, you tap on the appropriate icon before tapping on the desired target. Simple, right? 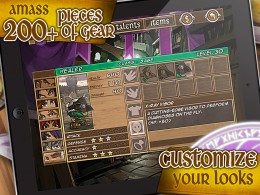 Sort of. Once you dive into it, things start to get complicated. One of the things that you’re going to have to monitor is energy. Almost everything you do (item consumption being the notable exception here) requires expenditure of that precious resource. If you permit a character’s energy to drop below a certain percentage, they’ll be useless up till the point their bar replenishes. And no, you can’t block under these circumstances either, something that will be the cause of despair at least once.

There’s an element of ‘rock, paper, scissors’ to the fights. You see, each entity in the game is associated with one of four classes. Each class, in turn, is represented by a color. Bandits are red, soldiers are blue, healers are green and wizards are flamboyantly purple. As you might have guessed already, certain classes will do well against others. The rogues of the game, for example, do well against soldiers but fare poorly against a wizard’s assault. Needless to say, the ecosystem of colors is something you’ll want to keep in mind if you want to perform effectively in combat. 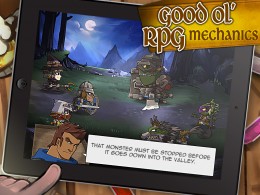 Skills have been done in a rather interesting fashion here. While most games demand payment in mana or energy, Battleloot Adventure wants payment in stars. Stars are what you acquire when you’ve inflicted sufficient amounts of damage on an enemy. Stars are also essential to some quests and provide bonus gold at the successful completion of a stage. Stars are great. Unfortunately, in order to use a skill, you’re going to have to spend a star. Will it be worth it? That’s entirely up to you.

On top of all that, you’ll also have to take passive abilities, talents, equipment, environmental effects, the fact you can rope your characters together to assist one another in attacks, and quest objectives into consideration. It’s a lot to juggle, but what makes Battleloot Adventure so neat is the fact that it’s not mandatory for you to know exactly what you’re doing. It is exactly as easy or as difficult as you want it to be. You can elect to finish everything in two rounds via a strategic usage of skills and physical prowess or you can work through each enemy slowly. It’s up to you.

One of the things that make me incredibly happy about Battleloot Adventure is the way they’ve handled IAPs in the game. They’ve done an excellent job with it. I think this is the first time I’ve said that about any game’s usage of the freemium model, but it’s true. Instead of ransoming your headgear or demanding money to unlock new quests, Battleloot Adventure will offer you in-game gold for real-life cash, and if you don’t want to, you don’t actually need to buy the gold. Things in Battleloot Adventure do not cost an arm and a leg. At most, they might cost a toe or an unimportant finger. It’s definitely a refreshing change.

That said, with Battleloot Adventure, patience is important. In spite of all the praise I’ve lavished onto it, Battleloot Adventure is one of those games that takes a little warming up. The dialogue isn’t atrocious but it’s certainly not the most impressive in the world. As for the first Act, well, the less said about it the better. I understand wanting to ease the new player into the world but the pacing’s slightly off for Act 1.

Nonetheless, for those willing to persevere, the game opens up when you reach Act II. Suddenly, there are things to do everywhere. There is equipment to unlock. There are feats to complete. With every quest you fulfill, more areas become unlocked. Speaking of equipment, I love the fact that all of the gear that you acquire will be visible on your party members in a wonderful display of attention to detail.

Battleloot Adventure isn’t perfect (I don’t want to look a gift horse in the mouth but that Witch is broken, guys. Broken. Also, there’s no Universal version. Why, Digital Tales, why?). Nonetheless, it’s still an impressive addition to the App Store and a game that belongs in your library. It’s immersive, it’s expansive (I’ve been playing it for a week), it’s simple, it’s something you can teach to your grandparents and your three-year old niece. As long as you’re OK with some minor quirks, Battleloot Adventure is one that you don’t want to miss.