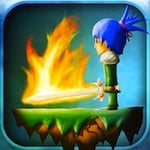 Swordigo [$1.99] shouldn’t be as refreshing as it is. We were playing through better hack and slash adventures twenty years ago. But the genre has stumbled en route to the App Store, and we’ve been left waiting for a classic of the mobile era. Swordigo might just be the one.

Touch Foo is building a reputation for impressive games. Soosiz [$1.99 / HD], the studio’s first release won our hearts with a combination of novel design and great controls. Swordigo has all the things you’d expect from a good hack-n-slash: boss battles, sword combat, spell slinging, character upgrades and a ton of exploration. We’ve seen it all before. So why is it so utterly satisfying?

Scarcity is part of the reason. But Touch Foo has done more than create a game in an under-represented niche. It’s done an outstanding job of building it in the process. 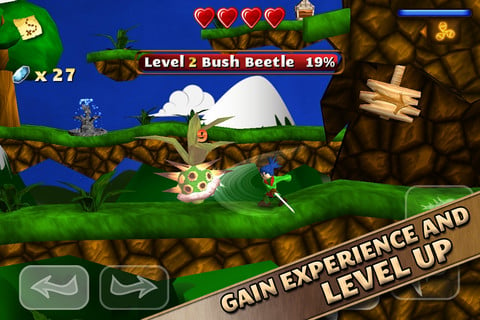 From the controls to the upgrade mechanics, nearly everything in Swordigo works better than you might expect. On-screen directional controls are so often awkward, but they’re flawless here. In the eight hours I spent with the game I only bungled one or two jumps with my hand out of place, a better than reasonable margin of error. And that eight hours of content? That’s just for the main game. If you’re inclined to hunt down every last treasure chest (and earn the related Game Center achievement), expect to put in more time.

The art might be a problem for some. I’ve never been comfortable with Touch Foo’s style. The critters and character design in Soosiz grated on me, and the transition to 2.5D hasn’t helped. The environments are decent if repetitive, but it would be generous to say the character models have the detail of a Playmobil figure. You might be inclined to skip the game because of that. Don’t. The hero looks better as the game goes on, and you won’t notice the look when you’re knee deep in rock-solid gameplay. 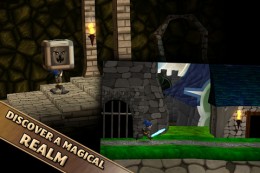 You also shouldn’t look to this game for an original story—Swordigo goes well beyond nodding to Link and his crew. I’m not saying that like it’s a bad thing—it’s a charming homage, and it’s also unobtrusive. Touch Foo clearly spent its time elsewhere, designing an impressive platforming experience and a fun set of customizable upgrades. Some of the latter can be bought with the not-rupees dropped by enemies and unsuspecting bushes. Others are found tucked away in secret treasure chests.

Early on, there isn’t much to do. You’ll have a sword and a jump button and can only do so much with the combination. But your toolbox expands as the game’s four spells are introduced. Three can be used against enemies, and all four let you interact with the environment in new ways. You can shoot switches with your magic bolts or blow up hidden walls with bombs. Boss fights take advantage of those abilities, and there are unique challenges in nearly every new area. Because of this, Swordigo stays novel for its entire length, never relying on familiar tactics for long.

If a challenge can be defeated using spells or objects from the environment, the game plays beautifully. Sword combat, on the other hand, is a bit stiff. Your attacks run in a pattern, and you’ll often need an overhead swing at just the moment you slash forward. Enemies seem designed to exploit that weakness in the most frustrating ways, firing just over your sword’s reach or swooping down and hitting you in the face. Thankfully death is rarely a problem—falling takes you back to the last ledge with a sliver of health lost, while anything more permanent drops you at the most recent checkpoint. You can also teleport between checkpoints, so it’s trivial to take a trip back to town to shop or heal.

So while there are frustrations and a handful of small bugs, they’re blips in a solid eight hours of entertainment. Whether it ends up as a hidden gem or a genuine hit, Swordigo will have earned its place in any number of hearts. Touch Foo may be treading familiar ground, but it does so with great skill. If you’re up for a good old fashioned adventure, this is where you want to be. You might also want to be in our forums—it’s dangerous to go alone.