I must be biologically programmed to react instantly to anything that reminds me of The Legend of Zelda for NES. Take Carota! [$1.99], for instance, which is a puzzle game starring a rabbit named Thaddeus who’s been knocked down a hole and must proceed through 50 levels of puzzling to make it back to the Earth’s surface. Must have been a deep hole, yeah?

Anyway, if you’ve ever played Zelda (and who hasn’t), you’ll recognize that some of Carota’s levels take place in a room that looks awfully like the rooms of the Zelda dungeons. And so, the nostalgia begins…

It’s really no more than a hat tip though, which I appreciate, since I’ve played plenty of Zelda clones. Carota! is anything but, going in favor of an interesting little puzzle dynamic where you turn blocks with the touch of a finger in order to guide your rabbit to the door.

This sounds very simple, and in the beginning, that is just what it is. You can drag blocks around the screen in order to craft this path, but in order to clear a level, you must use a certain number of blocks or the door will not open. This is no problem at all when your goal is to use four. It gets somewhat more complicated once you have fifteen. Did I mention the blocks also disappear after you waste enough time? Yep, there is that. 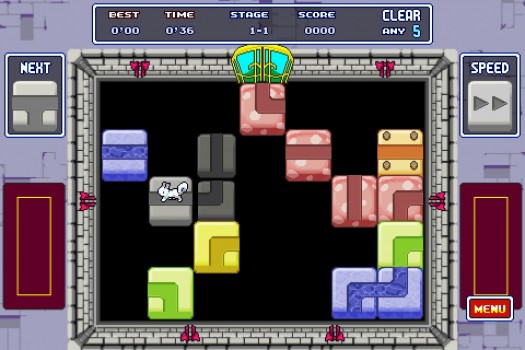 You do have a few options at your advantage, however — you can introduce new blocks in at anytime (and you’ll get a preview of what each block is, in the upper left hand corner), and you also have access to a speed button which makes your bunny friend go just a tad faster. Both of these resources are invaluable as the levels become more difficult. Since Thaddeus only walks in one direction most of the time, you’ll have to be crafty about making sure you turn blocks at just the right moments to keep him moving, too. Oh, but he always turns left at forks. And he cannot walk back on a tile he has already crossed. Have you got all this written down?

Keep that pen out. In later levels, there will be more new blocks for you to learn to work with, such as blue ones that are slippery. To say that Carota! gets difficult later down the line would be a bit of an understatement. You’ll have quite a bit going on to manage if you can progress, and that’s when one of the game’s fatal flaws comes in — it’s not always 100% responsive to touch when you are trying to move blocks around. It’s mostly responsive, but I did have a few issues where I had to drag my finger across the screen several times when trying to move a block, which meant losing the precious few seconds I needed and Thaddeus fell to his doom.

Carota! will time you as you progress through each level, so if you want to try to improve your score, the option is there. To tell you the truth, though, some of these levels drove me so crazy, I don’t think I would ever want to play them again. If you’re a high score rockstar, however, OpenFeint and Game Center are waiting for you to get in there and show off your high scores.

I liked the concept of Carota! but I thought it could have been executed better. If the controls were as responsive as I expected, I think it could have helped with the challenge of later levels, but fighting against that issue and the difficulty at the same time made me feel as if I was struggling to have a good time. When the formula works, it works well, but if you don’t have a high tolerance for punishment, you might want to spend that $1.99 elsewhere.