In its brief time on iOS, Radiangames has shown great skill at finding the spark of potential in games that are getting on in years. Late last year we looked at Super Crossfire [$0.99 / HD], a powered-up take on Space Invaders. Now we have Fireball SE [$0.99], a game partly inspired by Geometry Wars II and its Pacifism mode.

In Fireball SE, as in Pacifism, you fly around dodging huge waves of enemies in a top-down arena. Trouble is, you can’t shoot. Instead you lead your foes to their deaths, through bombs here, or gates in Geometry Wars. But where one was a tiny afterthought of an avoidance mode in a much bigger arcade game, here it’s been fleshed out with new rules, stages, achievements and scoring mechanics, and it’s so much better for it. It’s sort of like Tilt to Live [$2.99 / HD] without the tilt, but let’s put comparisons aside—this game is seriously fun on its own.

Fireball SE is broken down into three modes, but all three share the same fundamental mechanics. Using a truly responsive (and adjustable) virtual joystick, you pilot a fireball around the arena. Enemies spawn, starting in the corners and spreading out from there. Bombs appear. You skim by them to set them off on a short timer, or slam into them to blow them apart. If the action gets too fast, you can jam your other thumb down to activate Meltdown, which slows everything down for a few seconds while you get back in control. 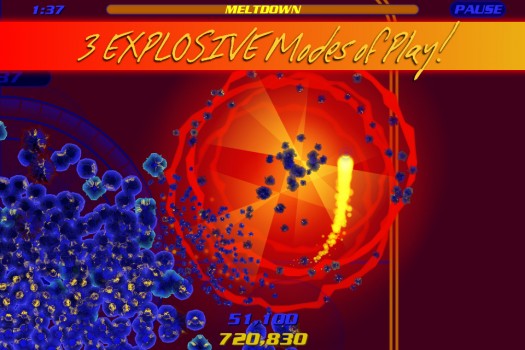 The scoring is particularly intricate. Killing enemies is worth points, and killing them in combos is worth a lot more. It’s more than a linear increase, so it’s really worthwhile to string along as many enemies as you can before smashing through a bomb. When they die they drop sparks. Collecting those is worth points too, so you’ve gotta go back into your trail on a regular basis. Fireball rewards the daring.

Of course, you only have one life. Did I mention that? One little mistake and you’re dead. Waves mode counteracts this by letting you start from any wave you’ve reached, so hitting all eight isn’t obscenely hard. But your score will suffer—it carries over between waves you survive, and starts fresh when you do.

Survival and Countdown are two sides of another coin: Survival counts your time up, and Countdown counts it, uh, down. But Radiangames has done something interesting here. Both modes are split into five stages each, and each stage has a different feel. The speed is a little different, enemy spawn patterns vary, bombs appear more or less often. Part of this is about letting you find your groove, but another part is ripping you out of your comfort zone. The Game Center leaderboards for these modes track your total score across all five stages, so getting in a rut hurts.

Otherwise Fireball SE is comfortably familiar. There’s a good beat in the background and art that’s stylish in a very blue and orange sort of way. There’s a whack of achievements to earn. There’s even an easy mode that accounts for its lowered difficulty with similarly lowered scores. The package is nothing all that special, but what’s inside is quite cool.

In a time where we spend a lot of energy weeding out clones and lousy rip-offs, it’s great to see a game that lands on the good side of imitation. Fireball SE has a lot in common with other titles, but it builds on that foundation. We end up with a game that captures something fun that has been left fallow elsewhere, one that turns a small spark of inspiration into a solid, well-rounded new form. So give it some love, and swing by our forums to share what you’d like to see from it next.