The arcade shoot’em-up Crossfire was released for Xbox in July 2010, followed by Crossfire 2 a few months later. Now Radian Games and their publisher, Chillingo, have released Super Crossfire [99¢ / HD] for our iOS devices. This game plays like a colorful version of the classic 1978 game Space Invaders, with one key difference: When a wall of bullets and lazers rains down on you, leaving you boxed in the corner and about to be destroyed …your spaceship can flee to safety by warping between the top and bottom of the screen.

But warping to the top of the screen doesn’t necessarily ensure your safety, as the aliens can shoot upwards too. Some enemies have shields and can only be hit from one side, which necessitates warping up and down to get a clear shot. By collecting the gems dropped by destroyed aliens, you can charge up segments of your super-fire meter, then briefly shoot anything, even if it’s shielded.

The warp drive is an interesting twist, as it forces you to pay attention to both parts of the screen. The developers blog mentions that they once considered having enemies move like another classic arcade game, Galaga, but they decided against this as it interfered with the warping. Still, it would be nice to see some different movements or perhaps a boss appear. That said, the game  throws 19 enemies and more and more bullets at you, until it almost feels like a bullet-hell scenario, which works really well. 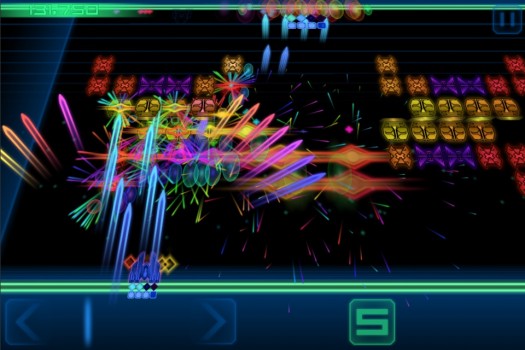 Periodically, a UFO flies across the screen, which is another familiar concept from Space Invaders. The flying saucer drops a power-up when destroyed. For example, it might drop a bubble shield or slow-down the enemies movements. To collect a pick-up you simply warp across it. Unfortunately the pick-ups aren’t super exciting and it doesn’t announce what they are when collected.  Although the bubble-shield is very handy amongst all those bullets.

The game has a fast and exciting pace, with wave after wave of vector-graphics style enemies. There’s a camera tilt effect which displays the entire game on an angle which changes each time you warp. You can select high or low angle tilt, although I personally found the angled perspective off-putting and turned this option completely off, so it’s great that these options were included. 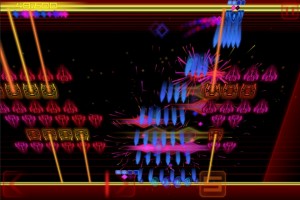 After every five waves of alien attack, your ship is repaired and you’re given the opportunity to upgrade it using the points you’ve acquired. The upgrade system works really nicely. There are ten upgrade categories, including:  Armor, speed, shot frequency / power, firing rate, shot spread / speed, super power, super segments and gem magnetism. You can also downgrade these categories mid-game and re-allocate the points to different abilities. An auto-upgrade option is available, but it’s fun to customize it manually.

Super Crossfire offers hundreds of control options (or to be more precise: 9). This includes 3 button, 3 tilting  and 3 slider lay-outs, with additional options for multi-touch. Unfortunately, none of these control options felt nice on the iPad, as the left and right buttons are too far apart. If you’re going to put that much effort into controls, it’s probably better to let the user customize the button positions themselves. Fortunately, it’s far more comfortable, enjoyable and cheaper to play on the smaller iPhone or iPod touch screen, where the buttons are closer together.

The main menu has an “Unlockables" section, listing nine items to unlock with earned victory points. For example, the “doubler" makes enemies and gems worth twice as much, “Musician" enables the music-player option on the main menu, with sliders for tweaking filter and pitch, while “perfection gives you extra victory points for each perfect wave.  The most expensive unlockable is “Super Blast" which gives you a wider superfire.  You can also use your victory points to unlock chapters early. And you can buy victory points as in-app purchases.

There are five chapters to play through, with 150 unique enemy waves and three difficulty levels to unlock. The leaderboards are managed using Chillingo’s Crystal as well as Game Center, along with 16 achievements. There’s high score tables for 1-life and composite scores, plus a leaderboard for each of the five chapters. When you die, you can continue an infinite amount of times, without needing to restart from the very beginning, thankfully.

Personally, I didn’t enjoy playing Super Crossfire on the iPad as the main left / right controls are too far apart. However, after switching to the smaller iPod screen, it was an enjoyable classic-feeling arcade experience. After 33 years, shooting space invaders is still fun! The developer advises the first update will include the “Dark Chapters", delivering some even faster-paced action and offering higher upgrade points, with an alternate background color scheme. The first update will also include additional leaderboards and achievements.