If you value productivity, don’t make the same mistake that I did. Don’t fire up Tobe & Friends’ Hookshot Escape [$1.99]. Just don’t. Trust me on this. I know what you’re thinking. You’re an App Store veteran. You’ve survived a Tiny Tower addiction. You’re on top of your game. One round won’t hurt.

Well, the cake is a lie, my friends. Tobe & Friends Hookshot Escape sucks you in in all the right ways. It’s simple, it’s easy to get into, and it has the whole unlockable things down pat. There’s a rhythm to Secret Base’s cloyingly cute endless vertical runner that would do Beat Sneak Bandit proud – it’s all too easy to get lulled into a pattern of discovery.

Tobe & Friends’ Hookshot Escape has a knack for slyly ensuring that the next unlockable is always ‘a few more rounds’ away. There are a total of twenty to unlock, by the way. Additionally, asides from Tobe, you also get to make use of three other characters. Asides from being able to run and jump, each individual has a special ability of their own. For example, the tousled-haired Tobe has a hookshot that permits him to catapult himself upwards. 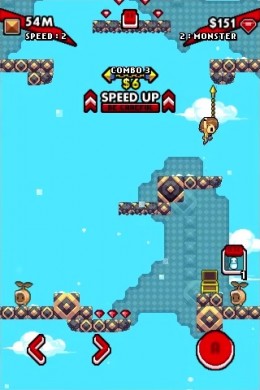 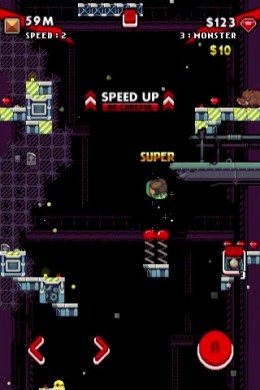 A decidedly retro-looking endeavor, Tobe & Friends’ Hookshot Escape is a game with a simple demand: climb. For reasons unknown, the various worlds you find yourself ensnared are crumbling away, and you must engage in a futile attempt to escape the inevitable for as long as possible. Depressing as that description might sound, Tobe & Friends’ Hookshot Escape is actually rather adorable. This solid little iOS port (there’s a slightly watered-down Flash version in the wilderness out there) features Secret Base’s distinctive art style and an infectiously chirpy soundtrack. 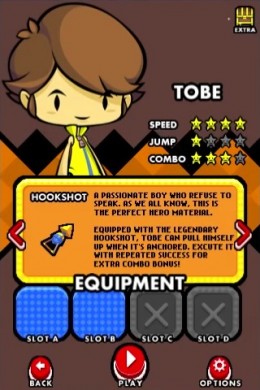 For the hardcore out there, you needn’t worry. The saccharine-sweet exterior is just a deceptive facade. Underneath, Tobe & Friends’ Hookshot Escape is as demanding as any arcade title from the good old days. The action starts out slow. You’ll have the opportunity to leisurely vault onto platforms and beat on the local subterranean fauna. Is there a chest on that other ledge? Go ahead and grab it. Make mistakes. It’s okay.

However, as you move higher up, the velocity will increase accordingly. Before you realize what’s going on, Tobe & Friends’ Hookshot Escape will have you eschewing treasure in favor of simple survival. Along the way, you’re also going to be mindful of the combo system. While not an essential part of the experience, it can add drastically to your overall score (the combo system will reward you with bonus cash should you be able to chain certain actions together in rapid succession).

The only problem here is the virtual controls and the way the game makes you play it portrait-style. It can be taxing to clutch at your phone so desperately. Because of how cramped everything is, there is a chance for mistakes and in a game like Tobe & Friends’ Hookshot Escape, a mistake can cost you everything. Fortunately, however, this is something that can be overcome with a little bit of practice and perseverance (and an obsessive-compulsive need to unlock everything in the game).

In spite of the fact it demands pin-point precision, Tobe & Friends’ Hookshot Escape is not completely sadistic. Casual players will be able to pile on a variety of equipment to make their escapades easier. However, if you’re a high score fanatic, you’re probably going to go without – the usage of items will lower your final tally.

I don’t have much that’s bad to say about the game. Outside of the fact it might aggravate your Carpel Tunnel Syndrome or demolish what little free time you have, this game is impossible not to love. You would need a heart of stone. Tobe & Friends’ Hookshot Escape is a fine game and I say this with only a minimal amount of bias – a Dragon Punch-enabled character just makes things so much better.