Hot off the recently released Dungeon Crawlers [$3.99], the folks over at Ayopa Games are back with Mailmen [$1.99], an enjoyable stealth-based tale showcasing the eternal battle between mail carriers and the canines that chase them. Featuring a crazy story, good team-based gameplay, and well done level design, Mailmen is well worth checking out.

Mailmen follows the tale of three postal employees as they try to deliver letters and packages to the public while thwarting the plans of the nefarious Newman, a former member of the team that turned to evil. Standing in their way are packs and packs of dogs eager to catch, chase and bite our heroes. The story is off-beat, ridiculous, and completely appropriate for the style of game Mailmen offers. This is also echoed in the development of the team itself, which does a great job imparting personality into each of the characters in every little thing they do. 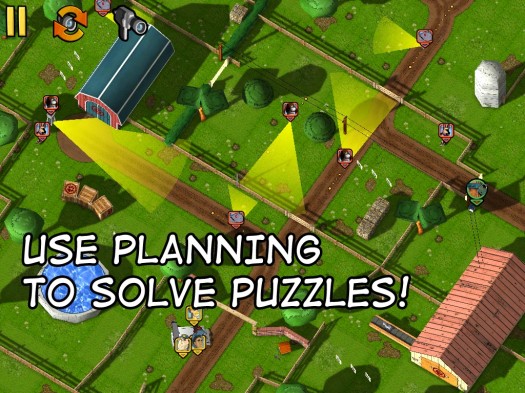 Gameplay is divided into objective-based levels. While the primary goals typically involve delivering a package or item from one part of the map to the other, each mission always has optional objectives, such as delivering letters to special mailboxes and collecting stamps. Sure, you can skip these side quests, but they’re essential if you want to get the highest score (and thus, the highest rating for the map). While some levels focus on only one of the mailmen, most of them will have all three working in some sort of tandem. 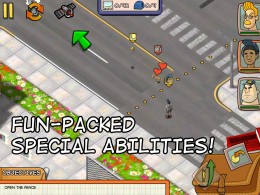 Your team members aren’t just there for show, either. A big portion of Mailmen is its team-based stealth gameplay. Each mailman has unique abilities that must be utilized if you’re going to avoid the dogs (and score the most points). For example, Johnny is the only one with that can tie up dogs with a rope, while Charlie can hide in trees and throw a reclaimable ball to distract dogs. While the gameplay elements aren’t necessarily the deepest I’ve seen (you really only have a handful of abilities), I’d rather play a game that is well-executed and slightly simpler than a complex one that’s a mess to learn and control.

Dogs, meanwhile, serve as the primary nemesis and deserve some attention in their own right. Each dog has its own cone of vision, and you’ll spend the vast majority of your time figuring out ways to move across maps while avoiding the dogs spotting you. Most dogs basically operate in one of three different modes: patrol, stationary searching, and simply stationary. Later levels introduce deviations such as a dog on top of a watchtower that can see over most items that would normally block their view. 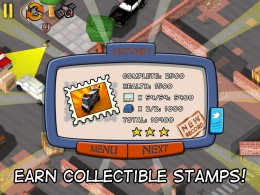 If you happen to get caught by a dog, they do what any canine naturally does to a mailman: try to bite them. Mailmen features a few breeds, ranging from the small Chihuahua (which mainly just barks and alerts other dogs), to the German Shepherd (usually asleep, but can do damage if it gets woken up) to the Rottweiler (can actually free other dogs that get tied up). If you happen to successfully hide, dogs do eventually go back to the patrols. As imagined, endure enough dog bites and the game is over.

Having good team mechanics are all well and good, but they don’t mean much if the level design doesn’t take advantage of it. Thankfully, Mailmen does a great job with that aspect of its game. Introductory levels do a good job of presenting the mechanics of each of your teammates, with later levels evolving into somewhat elaborate labyrinths that hit the right balance between difficulty and approachability. Obviously with stealth being the main ingredient, Mailmen is a bit slow-going, but that really is expected for the genre. With that said, I was never really frustrated with any of the levels, although getting three stars on later missions requires a lot of patience and planning. Still, more levels would have been nice, as the game is a little on the short side.

Control-wise, Mailmen does a decent job utilizing tap-to-move mechanics for controlling your characters. However, there are some other decisions that just feel clunky. For example, I loved the top-down isometric perspective, which just works for the gameplay. However, a pinch-to-zoom scheme really would have been a nice addition for viewing the map, as the ‘satellite’ view (which lets you see most of the map on the same screen) zooms out way too far, while the normal camera angle doesn’t suffice for the bigger maps. The same goes for changing camera angles, as a multi-touch gesture would have been a lot more precise and intuitive than a ‘Change Camera Angle’ button.

UI annoyances aside, Mailmen is an entertaining game and a great addition to the iPad stealth library. The team-based gameplay and silly story simply makes for a title that’s an enjoyable experience. If you’re a fan of stealth game that requires planning and patience, you won’t be disappointed with Mailmen.