Brad Nicholson said it best in our preview of Dungeon Crawlers [$1.99]: “It’s the video game equivalent of a mullet, reserved and business-like, yet fun-loving and goofy." I’d add “A little bit awkward in any situation," for both the mullet and the game. It’s a quirky strategy RPG that invests heavily in tropes of old, glorifies the Ghostbusters, and isn’t quite ready for prime-time.

Don’t get me wrong; fans of traditional SRPGs will find a lot to love if they give Dungeon Crawlers a chance. It’s a funny, charming, and mostly well-crafted game. You’ll run into a few glaring omissions, and you might have trouble with the game’s high memory footprint, but rest assured that Ayopa Games and Drowning Monkeys plan to address all of that soon. No matter how much I enjoy myself, though, I keep coming back to the same problem: Dungeon Crawlers is just way too ponderous. 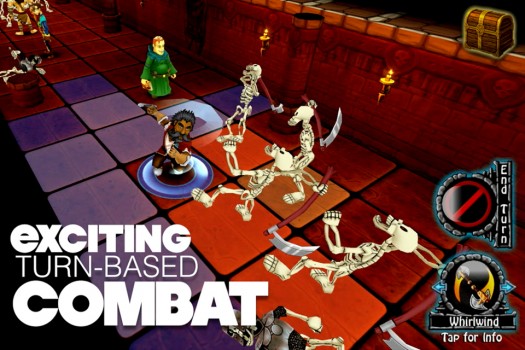 The mix of dungeon crawling and strategic combat works well. Basically, you poke around a dungeon floor by floor, fighting baddies, finding secrets, and occasionally solving puzzles. The game slips into turn-based combat mode the moment you enter an area with enemies. A movement grid is laid out on the floor. Enemies take their turns, one by one, and then the heroes take theirs. It’s a good formula, but every bit of it is too slow.

Enemy turns take too long, and can’t really be sped up. Every movement and attack feels a bit slower than it should, and everything has to happen in turn. Sometimes it feels like no one has any idea how to land a hit. In combat that already feels too slow, a whole round spent with weapons missing harmlessly (or landing glancing blows, a common problem) is dull, dull, dull. It would shorten the game, but combat would be a lot more fun if the developers cut out the weak hits, lowered everyone’s miss rates and let you fast-forward through enemy turns. 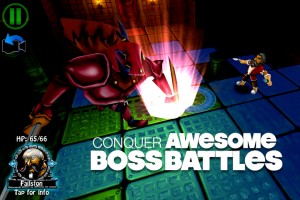 If only they could apply that sort of trimming to the rest of the experience. For example, you start with only three of your four heroes: Payter, Aegon and Roy (if you’re thinking Ghostbusters already, those should sound familiar), and each gets just one ability initially. For the first few levels combat is mindless. Payter walks up to an enemy and slashes it. Aegon casts Magic Missile from further back. Roy heals whoever is wounded. Rinse. Repeat. It’s a fine way to start, but the game takes far too long to start filling your arsenal with new friends and abilities.

It’s a shame, because I doubt many mobile gamers are going to wait the hour or two it takes for things to start getting interesting. Try to be the exception, because it’s worth it. Even though Dungeon Crawlers has a limited roster of characters, its encounters get both challenging and strategic. Much of the strategy is in learning to carefully position your party members. Payter, for instance, eventually learns to stun the enemies that surround him. Predicting where the enemies will move, you can put him in just the right place to get surrounded. Then you can line up Aegon to hit the grouped up baddies with an AOE, and keep Failston blocking the way back to Roy. Mana isn’t a consideration, but action limits are, so healing is a once-per-turn affair. If a character falls, they’re out of the game until the next floor.

Failing isn’t a a huge deal, since you can always restart from the beginning of a level or an encounter. But that decision really hurts when encounters start lasting for half an hour or longer. You should be able to offset this by using the coins you collect to buy potions in a tight spot, but you can’t. A shop is coming, as are IAP coins for the poor adventurer with a wealthy player. The game can already be completed without the store, though, so the IAP will be optional in the extreme.

Unless, that is, you try to plow straight through. Dungeon Crawler‘s loot system rewards the explorer. You won’t find much if you just stomp around killing enemies and opening chests, and your equipment will quickly fall out of date. If, on the other hand, you manage to find the levers that hide secrets in nearly every level, you’ll be at the tip-top of your game. The game could use a balance tweak or two to keep less-curious players geared enough to fight, though. The loot is all pre-determined, and it really hurts your chances if you miss a few secrets.

Even with all the frustrations and issues, I really dig Dungeon Crawlers. If you’re a sucker for references, this game plays with a ton of them – from the blatant and encompassing Ghostbusters theme to jokes about things the younger crowd might still understand. That’s on top of an engaging adventure tale that does its best to keep you interested in slogging through fight after fight. The characters, the music, the level design and environments – all great. You get the idea: the game would be fantastic if only it were pared down, cleaned up and sent out much more streamlined.

Until then, a cautious recommendation will have to do. If you’re looking for an old-school strategic romp through some very traditional dungeons, you’re in the right place. But these aren’t play sessions you can cram into five minute smoke breaks. Dungeon Crawlers is built to last – for better or worse, you’ll get hours out of it. If you’re a sit-back-and-be-patient sort, you’ll be just fine.