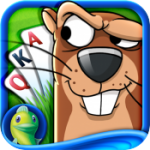 I may be dating myself here, but there was a time when I was completely obsessed with Windows Solitaire. I wanted to see every pixel of the game’s window covered in the cards that hopped down at the end of the game, and the obsession lasted just as long as it took to make that happen. Since then, stacking cards onto other cards hasn’t held the same charm. Then I picked up Fairway Solitaire [Free / HD] and now I’d kind of like my life back, please.

It’s not that Fairway Solitaire is particularly challenging—quite the opposite, in fact. It follows Big Fish Games’ usual mandate of making everything as player-friendly as possible. But between the dead simple gameplay and the weirdly compelling golf metaphors, I’m totally engrossed. And reading around online and in our forums, I’m not alone. This game gets its hooks into people more than one might expect from a golf-themed card game. 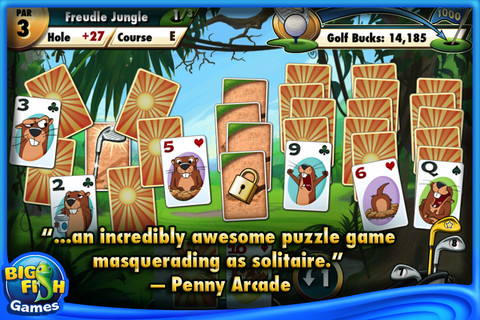 The game is built around one-card draw solitaire. The field is covered in cards that are stacked in various piles, face up or face down, and one card is drawn from the remaining deck at a time. You can put any card on top of that draw if it’s higher or lower by one. You keep stacking them until you have no cards left within one point on either side, and then you draw your next card.

Golf provides the framework in with the game is played. Each game is a single hole of a golf course. The score for an individual hole doesn’t matter all that much because your real goal is to hit below par for the whole course. The beauty of this system is that when you get to those awful awkward moments when the last few cards on the table just won’t work, you can end your game and move on to the next hole.

In fact, a cleared table will land you well under par. Not only does this make successful games particularly rewarding, it also keeps you from getting bogged down in losses. Just pick up your clubs, dust yourself off and move on to the next hole. You’ll even it out in the end. 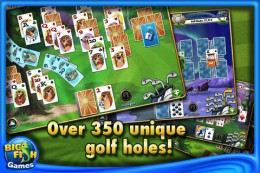 Speaking of clubs, they play a vital role in Fairway Solitaire. You can find them as you play or buy them with Golf Bucks, and they can be used as cards for cheating. Whenever you’re in a tight spot with few cards left in your deck, you can pull out a relevant club and build off that instead. Again, this design cuts down on frustration and adds a teensy bit of strategy thanks to the relative scarcity of Golf Bucks and the long cooldown on each club.

Not that they’re all that scarce. You earn Golf Bucks for everything you do. They come from achievements, from finishing holes, from really good shots. They also come from in-app purchases, if you’re so inclined. You can use them to buy clubs or gear that gives you other advantages, like letting you see how many cards are left in the deck or clearing away a few hazards at the start of each hole.

Fairway Solitaire starts with one course pack, which contains six courses and about twenty-four holes total. If you choose to pay a dollar to unlock the rest of the courses, there are ten course packs that open up as you progress and one that can be unlocked with Golf Bucks. The differences between holes lie in the card layouts, the hazards present (which generally must be cleared by finding a hidden card or sacrificing a card from your deck), and the number of cards you need to get through to make par. Since most of the holes have their card selections randomly assigned, you can pretty much play forever.

Quirks abound, like realistically banal golf banter (which can be turned off) and overarching story about an angry gopher. The latter only comes up when you draw a wild card, which will throw you into a random gopher-related situation. Some give you clubs or take away your cards, and some are silly little minigames that award you with Golf Bucks.

Some of the other quirks of the game are less pleasant.The HD version doesn’t include Game Center, while the standard version is about double the file size. Multitasking drops off unusually quickly and without it you’ll be sent back to the start of the hole. And prepared to be inundated with ads for other Big Fish Games titles whenever you load Fairway Solitaire up fresh.

Those annoyances aside, this is the new solitaire title to beat in my books. What it lacks in difficulty it makes up for in sheer mindless entertainment, which is arguably what solitaire does best. If you want to push for a bigger challenge you can always go for three stars on each course, but success ultimately comes down to luck of the draw. Instead, I’d recommend enjoying Fairway Solitaire as the never-ending meditative experience that it is. Let other games be challenging. For this one, compelling and fun might just be good enough.