Train Titans [$1.99] by Sad Cat Software is a puzzler focusing on train and train track management. While the game offers a refreshing amount of freedom for a puzzle game, a lot of its execution (especially in terms of controls and gameplay) leaves the game as something less than it could have been.

The premise of Train Titans is relatively simple: each train and depot has a certain color and your goal is to guide the trains to their respective (same colored) stations while helping them avoid other trains on the field. This is accomplished by laying out train tracks in whatever way you see fit (such as bridges, switch tracks, and more). Of course, there’s a wide variety of power-ups, obstacles, and various special buildings, but the end goal is always the same. Still, Train Titans succeeds in providing players a decent amount of flexibility in placing tracks. I’m a fan of flexibility in these types of puzzle games simply because it offers a wider array of solutions.

Train Titans offers two different modes of play. Puzzle Mode tasks you with playing through 28 different scenarios that have you trying to get a set number of trains to various stations. Players lay all the track work down initially and once they “start” the level, no more track can be built (you can still control stop lights and switch tracks, but everything else is static). This mode tends to lead to a lot of trial and error, which can be either very rewarding or infuriating depending on how much patience you have. 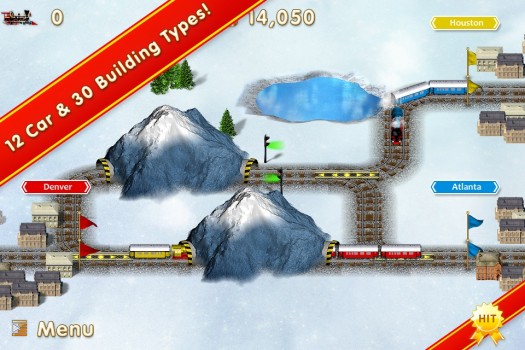 ‘Single Game’, meanwhile, is an interesting game type that starts you out with two depots and a small amount of money to build track. As you successfully steer trains to their destination, you earn more money to buy new track. New train stations  (and corresponding colored trains) also appear that increase the challenge. Train derails cost money and the game ends when all your money is gone. The game is randomized each time you start, leading to decent replay value, at least for this mode.

While I love the amount of freedom that ‘Single Game’ affords, the game tended to do annoying stunts like putting a new station in the middle of already laid track, forcing me to redo my entire track structure in short order before the trains started derailing (or even worse, putting the station next to a body of water where I can’t do anything). Sure, this is probably part of the ‘strategy’ of the game mode, but it was still frustrating nonetheless.

Another bright spot in Train Titans’ repertoire are the visuals, which are colorful, detailed and do a good job showcasing the terrain, towns and trains. The game is played out via ‘years’ and cities rapidly grow and expand the longer you keep a game going, which is a nice touch. I really would have liked the ability to zoom in though, as I think that would help greatly with interacting with some of the track elements.

While Train Titans has a decent foundation, I just found the game to be lackluster in its overall presentation and controls. Track building is a little clunky and can occasionally lead to building strange switch tracks which make it hard to change on the fly. You don’t actually ‘draw’ the route and have tracks magically materialize – rather you must place each individual piece in the right order to create a successful track. While it does get the job done, a simpler mechanic would have been less cumbersome.

For that matter the whole concept of tapping on switch tracks and stop lights, while great in theory, just doesn’t work when I need it to the most (something to do with hit detection I imagine). It’s also way too easy to get into situations where a train is preventing you from ever switching tracks or even bulldozing a track to rebuild (both actions are not allowed if a train is on the track in question). A lack of a fast-forward button also makes some of the more tedious moments a little slow going.

As a puzzle game, Train Titans is certainly on the right track with its premise. It’s mainly in the execution of its ideas and gameplay elements where the game falters somewhat. Still, if you’re willing to look past some annoyances, Train Titans is worth a play through.