Besides Illusion Labs’ Touchgrind [$4.99/HD] and a fairly solid port of Tony Hawk’s Pro Skater 2 [99¢], the skateboarding genre hasn’t seen a whole lot of love on the App Store. Don’t get me wrong, there have been some decent skateboarding games released, but nothing that ever felt like it gave you a full on experience like what you would be able to get on a home console. Jet Car Stunts [$1.99/Lite] developer True Axis is hoping to change that with their just-announced True Skate game which is heading to the App Store soon. Check out the first rendered artwork for True Skate below. 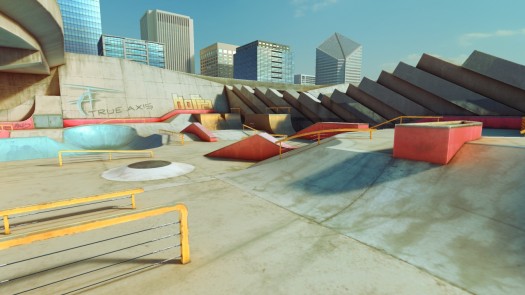 There aren’t a lot of details for True Skate just yet, but True Axis explains that the game is similar to Touchgrind but uses a pulled back perspective so you can actually see where you’re going. I love Touchgrind a lot, but its strictly top-down perspective made it pretty awkward to effectively put together strings of tricks or adequately aim for the various obstacles in the skate park. True Skate is also said to boast more realistic physics, and should be “much easier" to pull off lots of different tricks, according to True Axis.

True Skate will launch with the one level which you can see in the screens above, presumably with more planned for future updates. It will be coming out later this year for “cheap" on the iPhone, iPod touch, and iPad. We’re extremely eager to check it out and will have some more details soon, and until then you can check out some discussion of True Skate in our forums.