When I heard there was a multiplayer sequel to last year’s Puzzle Family [$2.99/Free], I was pretty psyched. Though the game was stuffed to the gills with in-app purchases, at its core it contained a pretty excellent collection of mini-games. I was looking forward to trying them out against a friend or two. That was not to be. As it turns out, the defining features of Puzzle Family must have been the wacky stylings and in-app purchases, because those are what have been brought to Puzzle Family VS [Free]. I guess the mini-games didn’t make the cut.

Instead, we’re looking at a single Tetris Attack-style game that pits players in a frantic block-matching competition with opponents from around the world. It features much of the lunacy of the original, but little of its variety. The letdown could easily have been enough to turn me off of Puzzle Family VS, but here’s the thing: I really dig it.

I dig it with a caveat, though: this is a good deal at the current price of free. If it returns to the release price of $1.99, I’d stay away, since competitive players will need to dip into consumable IAP. At least Com2Us tries to do right by its audience, rewarding early adopters with a huge pile of in-game currency to make amends for an unusually speedy price drop. 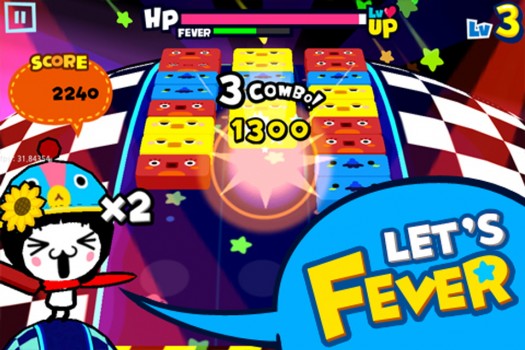 We’ve all seen this sort of game before. There are three columns of colored blocks that make their way down the screen. The blocks need to be matched with like colors in vertical rows of three by being lifted from one column and dropped in another. Because there is so little space to work with, this can be a claustrophobic prospect. I find the experience loosely Hanoi-like, stacking useless blocks back and forth between columns while maneuvering to make combos. This only continues until a block hits the end of a column, as per pretty much every block stacking game ever, so the only way to play involves a lot of risk management and quick moves.

The game follows ordinary match-3 progression, introducing more colors as time passes and levels are earned. Even just one or two extra colors can be crippling on such a tiny field of play. In single-player mode, you can get lucky and save yourself with a well-timed powerup – bombs, row clearing items and the like appear randomly while you play, and your choice of a single equipable item can be pulled out in a pinch. High scores are best earned with combos, and quick-fingered players will be able to chain them into the climactic fever mode. 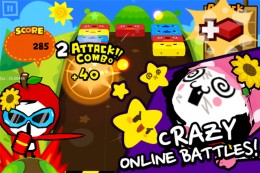 In multiplayer, as in Tetris Attack, making combos is the best way to destroy an opponent. The more matches made in a row, the more blocks are dumped on the enemy’s field. A good series of plays can knock someone out in just a few moments. It’s advisable, and likely necessary, to enhance that strategy with a good selection of powerups. There are three slots to equip and over a dozen items to choose from, so planning a solid attack takes some thought.

I’m not in a good position to tell you how the value proposition works with these items, because I’ve been given some forty or fifty thousand coins for reasons that were never made entirely clear. Something about picking up the game during its paid period and goodness knows what else. What I can tell you is that you can buy 8000 coins for a dollar, and packs of five of one item cost anywhere from a few hundred coins to over a thousand. If you’re conservative with them, you might be able to string things along with only the coins you earn in battle. Of course, then you won’t be able to buy any equipment, leaving you at a competitive disadvantage.

The non-IAP progression system is engaging, and deserves more focus than it gets. In single player, there are missions that call for things like using an item three times in the same battle or geting a stack of three combos four times in a game. In multiplayer, the only way to progress is by winning. In fact, losing is a blow to your overall rank. There are three rank-defined arenas to pull opponents from, and there is a good-sized community out there to fight. It seems that matchmaking is only done through Com2Us hub, and Game Center simply handles achievements and leaderboards.

Though it’s not exactly what I’d hoped for, Puzzle Family VS is a lot of fun. Most of the multiplayer games I really enjoy are of the ponderous, asynchronous sort, so it’s nice to have a completely frantic matching game to mix things up – even a frantic matching game with its hands deeply in my pocket. Com2Us has proven that they can craft a great multiplayer experience, and we know from past experience that they’re fantastic at building crazy fun mini-games. This is a great start at bringing the two together, but let’s hope they don’t stop here.