Most of us have played the game “Snake" which came pre-loaded on Nokia phones back in the day. You know the one: Eat pellets to make your snake longer, but avoid your own growing tail. There’s various snake incarnations on the App-Store, such as Hard Lines [99¢] which we reviewed favorably back in June. But right now, I’m really enjoying Hyper Snake [99¢] by ClawHammer-Games.

Hyper Snake uses accelerometer tilt controls to steer the snake and there’s no other control options. This will put some people off, but the tilt controls are really superb, with three different tilt configurations available depending on how you hold your device. I used the slightly-inclined setting and the tilts were totally responsive. It’s easy to move slow and precisely, or to accelerate the snake rapidly.

There’s six varied modes of play. The “Classic" mode is the closest to the familiar Nokia snake game, but each time you collect a cell, your tail extends with a segment of that color. By collecting the same color again, you increase your score multiplier. Unlike traditional snake, your snake doesn’t move forwards automatically, so you can almost stop on the spot. And as the snake moves, the meshed arena moves in waves around it, which reminded me of Geometry Wars [99¢] 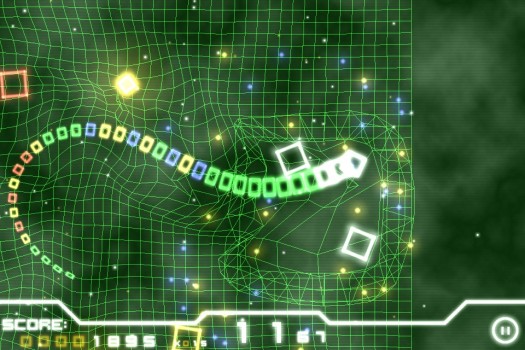 My favorite mode is “Eat" which combines traditional snake with Pacman. If your snake eats a cyan colored cell the enemies change color temporarily and you can greedily gobble them up. “Bombs" mode has little green cells (bombs) which slowly bounce around the arena but explode when collected, killing any enemies in close proximity. The trick is to lure a bunch of enemies towards a bomb, then detonate it. In “Split Mode" you ram shapes to break them down into destroyable chunks, much like the game Asteroids. Once all the shapes have been broken down and destroyed, new shapes appear.

“War" mode is the only mode where you can collide with your own tail without dying. But although your tail won’t kill you, it can destroy enemies. However, the enemies aren’t clueless and they try to survive rather than rushing blindly into your tail. Lastly, “Survive" mode involves some color-matching action. Each time you collect a cell your tail gets longer, but by collecting the same colored cell three times in a row that color is removed from your snakes tail, reducing the length of your snake.

The only problem I had with the tilt controls was the pause-game option. When you un-pause the game, if the device has moved position, the snake often dies immediately, so the pause button is not recommended (better cross your legs and hold off on that bathroom break). There’s also no screen orientation option, so it’s hard to play on the iPad with headphones connected, which is a shame as the energetic music adds to the experience and sounds better through headphones.

Hyper Snake is great for a quick game, has heaps of replay value and is quite challenging. However it’s crying out for Game Center, which the developers plan to add. It would also benefit from some power-ups, weapons or a second competing snake, to add even more variety within the modes. But as it stands, Hyper Snake is a already a keeper and probably the current king of the iOS snake games.