Dodonpachi Blissful Death [$4.99] is a port of Cave’s 2002 arcade title Dodonpachi Dai Ou Jou, and is a direct prequel to their previous iOS effort Dodonpachi Resurrection [$7.99/Lite] (which also happens to be my favorite of the Cave iOS shooters, FYI).

Blissful Death is similar to its sequel at a basic level, but it lacks some of the complexity and strategy found in Resurrection. But, like Cave’s last release Bug Princess [$4.99/Lite], its simplicity is also its strong point for those who maybe aren’t hardcore bullet hell people or those who just like to blast the crap out of everything without much fuss.

If you’re familiar with other Cave titles then you should feel right at home with Blissful Death. You have 2 different ships to choose from, each with a normal cannon and a laser weapon to switch between while playing. There are also 3 different Elemental Dolls to attach to your ship, which augment its abilities to suit your play style. One doll gives you an increase in your regular shot damage and 3 bombs to start with. Another increases your laser weapon’s abilities, but you’ll start with just 2 bombs instead. The final doll powers up both your regular cannon and laser, but starts you with just 1 bomb. 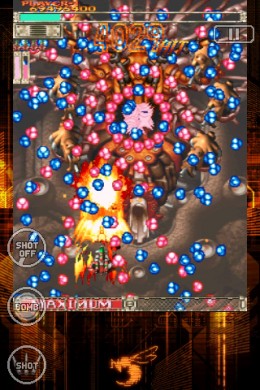 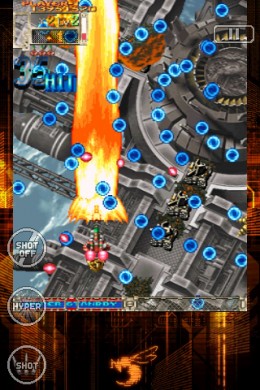 The scoring system is always a big part of any Cave title, and again in Blissful Death this takes a more simplistic approach over previous iOS releases. Continuously shooting enemies builds a multiplier. Your laser isn’t as powerful as your cannon, but keeping it trained on enemies can keep your multiplier active. So intelligently switching between your cannon and laser is key in order to keep the multiplier increasing while the waves of enemies come pouring from the top of the screen.

Blissful Death plays pretty similarly to Dodonpachi Resurrection, and although it’s not quiet as complex it still has a good amount of strategic depth. One thing that’s very different from Resurrection however is the inability to cancel bullets. This automatically makes Blissful Death one of the more difficult Cave shooters, because you generally have to deal with everything that’s thrown your way without much help.

One of the things you can do to deal with that problem though is drop a bomb, which will clear the screen of any enemies and bullets, and by default will automatically detonate if you get hit by enemy fire and have at least 1 bomb in your reserve. You can also use your laser on enemies to increase a hyper meter, which when filled can trigger a powerful hyper shot that will blast through just about anything.

Dodonpachi Blissful Death is a really straightforward shooter. It doesn’t get too cute with itself and lets you get right into the thick of the action with a very small learning curve. Newbies should feel comfortable with one of the 4 difficulty settings, and veterans can go directly to the Hell difficulty and pick apart its nuances.

And of course, everybody is able to enjoy the trademark Cave style, with brilliant bullet patterns, excellent sprite-based visuals, interesting character designs, and a million things exploding on your screen at any given time. It has OpenFeint and Game Center if you want to get competitive with your achievements and leaderboards (though annoyingly, that awful OpenFeint News Feed is uglying up the title screen).

It really is just what you would expect – another solid Cave release. However, as good as all of their ports are, I can’t help but wish that Cave would come up with another built-for-iOS experience like Bug Panic! [$6.99/Lite]. Hopefully they can go that route again someday, but until then I have absolutely no problem buying ports of their catalog on iOS if they keep being as good as Dodonpachi Blissful Death. If you’re a “try before you buy" type, a lite version of the game should be released in the next day or so.