Bacon. Cat videos. Zombies. There are some things in popular culture that just don’t get enough attention. Luckily for us, however, the undead are getting a second life thanks to Zxh Games’ Shoot Many Zombies [Free].

Shoot Many Zombies is pretty much exactly like it sounds. In this side-scrolling shooter, you shoot zombies. A lot of zombies. It’s mindless, attractive zombie-killing mayhem, at a perfect pace: not too fast a pace to be frustrating, not so slow that you’ll try to strategize your way through it.

You have your choice of three characters to play as, which mainly depends on your playstyle. You can go damage-heavy but slow, damage-light but quick, or a balance between the two. Once you begin, you have your basic weapon which can be upgraded as you work your way through the game. You can also buy new weapons altogether, so you can customize your zombie-killin’ experience. 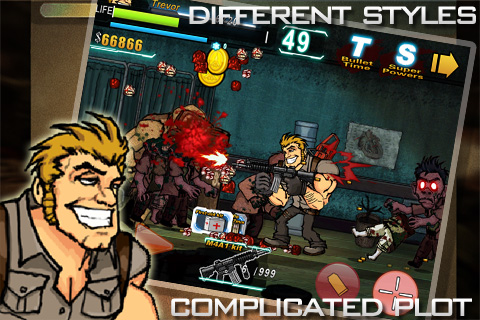 For a pretty straightforward concept, some things are needlessly complicated. Upgrading weapons is a necessity, but the menu doesn’t make it easy. For example, you don’t know the price of a particular upgrade unless you tap “buy,” so if you don’t have enough cash to tap “buy” in the first place to receive the confirmation, you’re not going to know approximately how much money to save up in order to get the upgrade later.

Things are repetitive and sometimes annoying. For example, there are various objects and safe rooms you tap in order to get items. It’s pretty dull popping into safe rooms in order to grab stuff, whatever it is – on an iPhone or iPod touch, the screen is too small to easily read what you’re picking up – and you have to do it a lot. There are other things that feel off too, like annoying sound effects (just wait for the shopkeep/gangster dude when you first start a new game and the “eeeeeee” noise upon reading a new diary entry) and sometimes piecemeal-feeling graphics.

Fighting specialty zombies feels a bit cheap in the sense that you need to have upgraded your weapons several times in order to have a chance. Of course, you can easily upgrade your weapons via in-app purchase (was there any doubt?), but you can also go back and replay levels to pick up more money and items.

Normally, the idea of repeating levels in order to progress would make me pretty miffed, but since every level is basically the same mindless zombie-shooting anyway, it pretty much just extends the gameplay. Additionally, I found that the in-app purchases were pretty much unnecessary because the random loot from killing zombies and exploring was often pretty good, and I never seemed to run out of cash too easily. If you feel like purchasing, however, the options aren’t bad, ranging from unlimited ammo to special (though not necessary) weapons.

There are lots of little added touches that are a nice surprise. When you upgrade a weapon, it actually changes the appearance of the weapon in-game. There are diary entries to pick up (though if you’re looking for Shakespeare, you’re going to be disappointed) that add to the overall story of the game, and it’s nice being able to choose which character best fits your style.

If you want to mindlessly mow down wave after wave of the undead, Shoot Many Zombies is a great option with enough good points to outweigh the bad. If future updates were to include Game Center, cat videos, and/or bacon, my friends, we might even have a bona-fide hit on our hands.