We first checked out Liv Games over a year ago with Legendary Wars [$0.99 / HD], a great take on castle defense. Now the developers are back with Monster Wars [$0.99], the latest addition to the genre. Billed as a ‘follow-up’ to their previous game, Monster Wars succeeds at preserving the same great gameplay of its predecessor while tweaking elements and offering a new story complete with a load of new units.

For folks that played Legendary Wars, Monster Wars will feel very familiar. The majority of campaign missions still feature the same castle defense-style gameplay where you collect resources, build units, defend your own castle from the opposition while simultaneously moving forward attack units to take out the opposing fortress.

The campaign also brings back the side-scrolling ‘hack n’ slash’ levels from the previous game (for better or worse). Each successful mission rewards players with coins to spend on unit upgrades, with an occasional soulstone (premium currency that you can also purchase using IAP). Most importantly, the deep character customization also returns, giving gamers a ton of incentive to play the game as much as possible simply to level up your character stats. 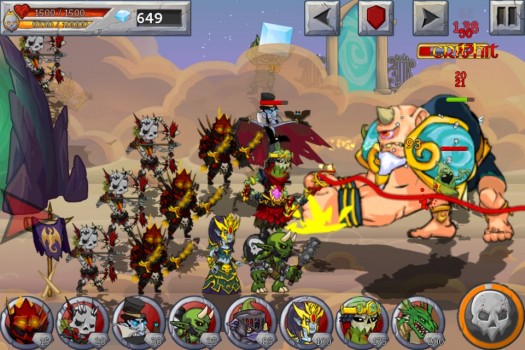 Despite these similarities, Monster Wars does tweak some of the gameplay by adding new variations on the types of missions we’ve seen in the past. For example, there are a lot more escort quests that have you guarding a ‘Named’ ally or a catapult as you make your way towards the enemy castle. In the case of the catapult, you have to actually use it to take down supplemental castle defenses before you can even damage it. The side scrolling levels have also seen some additions, with endless runner and other objective-based missions being thrown into the mix. In general, these tweaks don’t really do much to change the core gameplay, but considering how well done it is, I don’t care too much.

While Monster Wars improves upon its predecessor in a variety of different ways, I think the aspect that folks will appreciate the most is the sheer amount of content available. The campaign is huge and takes an investment to complete. If you want to take a break from the main story, the game features several endless modes which put you right into the action for as long as you want. The fact that you earn gems and soulstones, which can be used to improve your units within the campaign, is a nice (and necessary) touch. Finally, once you’ve conquered everything you think Monster Wars has to offer, additional difficulties are ready to challenge you all over again. 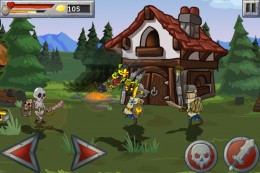 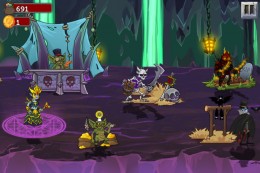 Another great way Monster Wars differentiates itself is with the all-new cast of monsters that you command in your army. There are over 15 new creatures, from the lowly Skelly to the awesome Lich, with each offering different attacks, special moves, and stats to improve upon. Each of the base units also allow you to upgrade its tier, giving the unit new stats, a new look, and even occasionally new specials.

There is a ton of variety in Monster Wars, and considering you can only take a certain number of units into battle, there are a lot of different ways to plan and play. I was a little disappointed in the fact that ‘tier-upgrades,’ (along with the ability to unlock some units) required as many soulstones as they do. Considering Monster Wars doesn’t pass out soulstones as much as I would want, players will either have to shell out some cash or grind a bit in the endless levels in order to earn enough stones to see everything.

From a controls standpoint, Monster Wars does a decent job. Buttons at the top of the screen let you quickly set attack and retreat orders as well as set simple formations. I did find it particularly tough to specifically select units during the heat of battle as your characters all tend to bunch up while attacking. However, I can’t really think of a better way of implementing something within the confines of castle defense.

Monster Wars also continues the excellent overall presentation started with Legendary Wars. A great soundtrack sets the overall tone of the game while retina-quality visuals paint a vivid picture throughout the course of your adventures. The story, a tongue-in-cheek narrative telling the Legendary (pun intended) tale from the monsters’ perspective, feels a bit trite at times, but still does a good job keeping the player engaged. There were a few strange UI issues, like certain screen buttons not registering taps (almost as if the tap window was smaller than the actual buttons), but nothing detracting from the gameplay too much.

I imagine some folks may complain that Monster Wars feels too much like its precursor without much of a change to the core gameplay. I say, why mess with a good thing? While the game does feel like a re-skin at times, Monster Wars still does a great job taking the classic gameplay from Legendary and transplanting it in a new setting. Add in all the new content combined with the deep character customization and there’s no reason you shouldn’t be checking out Monster Wars.