We’ve had our eye on Tweet Land [$1.99] from Why Ideas ever since we spotted it as a curious Kickstarter project back in April of last year. The project was more than sufficiently funded, and last month we were treated to a new trailer and news that Tweet Land would be hitting at the end of January. As expected, earlier this week the game finally went live in the App Store.

Tweet Land was intriguing due to its unique real-time usage of tweets drawn from Twitter that would trigger elements into the game. It reaches out into the vast ocean of Twitter and utilizes special keywords from real tweets to create things in the game. It’s a fantastic idea in theory, and Why Ideas did pull it off on a functional level just as they had promised. However, despite being really innovative, Tweet Land doesn’t hold up as well in the gameplay department, and there were a couple of unintended side effects of using live tweets that left a sour taste in my mouth.

First, let’s talk about the kind of gameplay that’s in Tweet Land. You control a car heading down the highway (Route 140 no less) and you must make it to the finish line while dodging tweet-driven hazards and other traffic on the road. You can veer into the other cars from the side to knock them off the road and score some points, and ramming multiple cars off the road at once will multiply the points you earn. If you hit cars from behind or run into road hazards, you lose a bit of life, which is represented by the visual damage on your car. 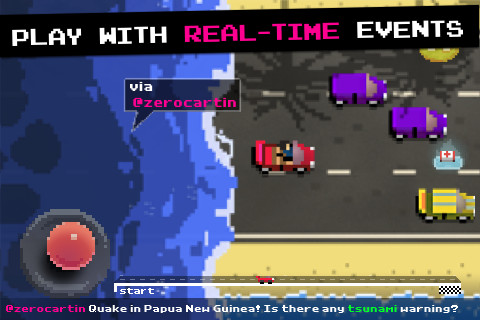 I really like Tweet Land‘s retro style, and there is a lot of humor and personality in its pixel art visuals (though it’s kind of blurry on my iPhone 4S). But things start to fall apart when you actually start playing. The controls are very slippery, and it’s hard to be precise when trying to properly ram other cars or avoid hitting hazards. With practice you can get used to it, but it’s still really annoying when you’re trying to quickly react to something and the controls don’t afford you the kind of finesse that you need to get it done.

I think when you have games that are built on top of a very simple core gameplay concept, you have to get all the little details right. That’s why games like Jetpack Joyride or Angry Birds are often imitated but rarely duplicated. as they get the feel of the controls and the movement in the game so right. If you’re going to be doing the same action over and over again, you want that action to be fun. While Tweet Land has its share of fun moments, something about it just feels off, like it’s missing something but I can’t pinpoint what. 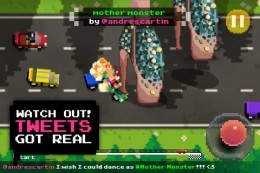 The game is broken into two environments with 12 levels each, with a spot for a third environment that’s said to be coming soon. With each new level, new tweet-driven elements are introduced and added to the current ones, so as you keep going the variety of things that can happen increases quite a bit. An example of a hazard would be if someone tweets the word “meteor" then a meteor will fly in from off screen and you’ll have to use the position of its shadow in order to avoid being crushed. There are helpful things that can be triggered in the game too, like health packs or a temporary spread shot for your vehicle.

One problem with the progression in Tweet Land is that it gets rather hard rather quickly, and if you get stuck on a level there’s no moving forward until you beat it. This got pretty frustrating since many of the times that I died it felt like it wasn’t actually my fault. When elements are brought in from Twitter, they are accompanied by a label with the Twitter handle of whoever tweeted that keyword. This is neat, but leads to an incredibly cluttered and distracting screen, especially when there are multiple things happening at once. Coupled with the floaty controls and the speed at which things are zooming by, and the odds are stacked against you. 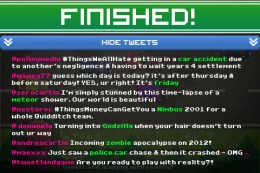 Arrows indicate where things will be coming in from off screen, but they’re hard to notice amongst the busyness on the screen and often aren’t very helpful. Add in the fact that there’s usually a ton of traffic on the road with you, and making it to the finish line intact can require a healthy dose of luck just as much as skill. The levels tend to be a bit longish, and nothing is worse than seeing your cheap demise when you’re within a stone’s throw of the finish. The more I failed a level over and over, the less I felt compelled to go back and conquer it.

However, my biggest issue with Tweet Land is something that I didn’t really expect: the tweets that the game draws from can be much too somber for what is supposed to be a fun and lighthearted game. For example, if someone tweets about a “car crash" then cars will zoom in from offscreen and wreck into some of the other traffic on the road. When your run ends, you have the option of looking at a list of all the tweets that were used to bring things into the game.

To my horror, I found that in this particular instance “car crash" was pulled from a huge retweet campaign trying to raise money for a girl who had lost her parents in a car crash in Florida. I know Tweet Land has no way of telling the difference, but I couldn’t help but feel crass for playing a game that was fueled by somebody else’s tragedy. With some of the other keywords used in the game – like tsunami, terrorist, and death – I have no doubt that encountering a downer situation like that will occur often.

While I do still think the idea behind Tweet Land is incredibly clever, I just find the game too fundamentally flawed to be enjoyable. Don’t get me wrong, I want to like it and I did find myself having fun with the game at times, but those fun times are quickly diminished when you realize your game is possibly being powered by the tragic tweets of strangers. Beyond that, the gameplay is too average to warrant dealing with cheap deaths and an unpredictable difficulty.

With some tweaks to the controls and interface, and perhaps some sort of filter for what kind of keywords are utilized, then Tweet Land could end up being something pretty special. It feels like it’s just a couple notches off of being something great, and I hope it gets there someday. As it is now, though, it’s hard to recommend the game except to those who might be curious to check out its novel use of Twitter or are prepared to deal with its shortcomings.