It’s not that Snoticles [$0.99] is a bad game. Not at all – it’s a competent puzzler across the board. It’s just that I’ve grown to expect a lot from games published by Adult Swim. Right or wrong, they blew us all out of the water with Monsters Ate My Condo [$0.99] and Bring Me Sandwiches!! [$0.99] Both have a frenetic sort of madness underlying them, one that seemed like it might just be a trend. The come down since then has been harsh.

Taken on its own merits Snoticles is certainly a solid title, minus a few recent weeks of crash-happy downtime between updates. There are five worlds of physics puzzles to be solved with the excretions of Zit, Dread, Spark and Snot, the titular snoticles. Each has its own abilities that are put to the test in solving puzzles defined by (generally) static blobs that must be destroyed. 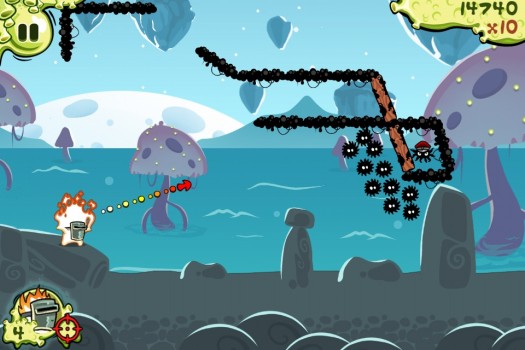 Each snoticle has a set number of shots to destroy the on-screen blots. You must carefully aim and fire, sometimes destroying obstacles before you destroy the blots themselves. It’s not completely unfamiliar. But there are no carefully constructed towers to topple, no slingshot to pull. Just the usual things – shooting, a selection of special abilities, a three-star rating system and the goal of complete destruction.

Zit’s shots are the default from which every other shot is drawn. His follow an arc afflicted by gravity and bounce off surfaces. If they hit an Alpha Blot, all other blots around it die. Spark launches fireballs that are unaffected by gravity and fly straight through almost anything in their path. Dread’s shots blow up everything around the first surface they hit. Snot’s particularly grotesque shots cling and can be dropped with an extra tap.

The formula works, but it never gets all that interesting. Every level has more or less a single solution, and most of them are obvious. The only trick is to pull them off with the fewest shots possible. In practice this mostly winds up meaning you’ll retake the same shots in the same order and try not to miss. As the game progresses, more and more blots are shielded and can only be destroyed by one particular snoticle, which only serves to make the correct solution even more obvious.

There are elements that complicate matters – breakable surfaces, moving parts, tunnels and gravity wells and such. Only the last of those adds significant complexity, and that’s only really by making shots much harder to predict. It’s more frustrating than challenging.

There is satisfaction to be found stalking through the levels to hunt down every last blot, don’t get me wrong. It just doesn’t rise above a fairly straightforward premise. There’s an even-keeled wackiness there, but it just doesn’t have much on the outright insanity of some of Adult Swim’s other recent releases.

Here’s what it comes down to: Snoticles is a good game. It’s a fun physics puzzler that provides a mid-tier challenge. But there are so many similar games out there, and this one doesn’t do much at all to set itself apart. If the App Store hasn’t slaked your thirst for aimey-shooty physics games yet, you absolutely won’t go wrong with Snoticles. I just have to wonder if there’s anyone out there that still meets that description.