I’ve played a lot of iOS games in my time, and have gone through varying levels of addiction with certain titles. Even so, that usually doesn’t last for too long. I’ve never found my own personal Angry Birds or Tiny Tower. That is, until I picked up Hero Academy [Free] for the first time. Shortly after, I noticed that I was playing a match while cooking, waiting for people to come over, or pretty much any other time I had three free minutes or more at a time. At that point, I identified that I might have found that game that I feel the need to play endlessly. Good news is, all my other friends seem to have the same problem, so that works out for me.

Hero Academy is Robot Entertainment‘s first iOS offering, and I think it’s the sign of good things to come. The premise is very basic: You are playing a tactical battle against another team, and the goal is to destroy their crystals before they destroy yours. Each round allows you five moves (“action points"), which you can use to either place team members and items on the board, or move and attack with your preexisting team members. 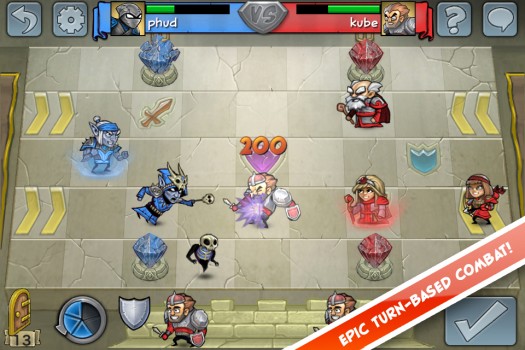 If you play the free version of the game, the only team available to you is the Council, which is made up of humans and is a well-balanced option. Should you wish, you can unlock the Dark Elves for $0.99, which can summon the spirits of their fallen enemies to aid them in battle.

At the bottom of your screen, you’ll see a selection of five items and characters, which the game randomly deals you each turn. If you don’t like what you got, you can use your finger to drag anything you don’t want over to the tiny door in the bottom left corner. Once your turn is finished, you’ll get new stuff and hopefully get dealt exactly what you were looking for. This selection of items includes spells and weapons to strengthen your characters’ attack and defense abilities so you can survive in the field for longer. 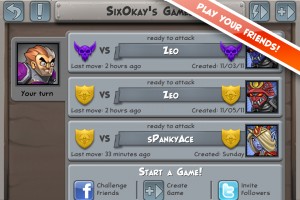 The board itself also includes some options to give you the advantage. In the middle of each board is a tile with a crystal on it, and reaching it will weaken the enemy’s crystal a bit. There are also tiles that have a sword or a shield on them, which will give you a buff to attack or defense. At the end of a turn, you can also choose to submit your turn normally or submit it with a taunt, which is pretty much just to piss your opponent off.

Getting to know your characters and how their skills can be used is vital. For example, the magician can cast a spell that can hit a row of opponents and only spend a single action point on it. Using these types of skills to your advantage will give you the edge needed to keep those fools off your crystals.

Frankly, I’m no fan of waiting around for someone to take a turn. When I first saw that Hero Academy had no single player mode where you could at least play against the computer, I was a bit let down. At first, I only had a few games going with other friends. The key to the fun of Hero Academy really came clear when I got a lot of games going, and that was when I started to feel my skills were improving and I was getting better at it. Considering my moves more carefully and how I could best defend against the way my opponent played was rewarding, and I started to win more matches.

There is one downfall to the game, and that is that the free version is relentless when it comes to in-game ads. Between each match, you’ll see an ad that you have to stare at for five seconds before it disappears and you can play again. If you’re good at ignoring things, you may not mind one bit, but if you’re like me and it bugs the hell out of you, you can buy any heroic team to get rid of the ads, which costs a buck. Only the Dark Elves are available for now, but Robot promises new teams are coming in the near future. You can also spend a bit more to get new avatars if you so desire.

Hero Academy is a simple game, and it does what it’s built to do very, very well. If the content continues to expand and offer more for the fanbase, I could see it being something I would want to come back to over and over again in the future. It also offers access to invite Facebook and Twitter friends to join you right in the menu, so never fear if you don’t have enough games going at a time. Invite everyone you know, and soon enough your phone will be jingling with the notification sound you’ve learned that you’re unable to resist.