As far as premises go, two dogs that are tied together by the tongue is a bit of an oddity. But on a platform that regularly sees us flinging birds at pigs or feeding candy to monsters, it’s best not to ask too many questions. Besides, Tongue Tied’s [$1.99] adorably vacant duo Mick and Ralph are so much better together than they could be apart.

Their predicament sets them up for all sorts of physics-based platforming challenges. You can slingshot them off each other, or send them flying in circles. One can hang by the tongue and swing below while the other walks. It’s your job to shoot them over hazards or into tasty bones and keep them from harm, because they’ll just keep on walking inexorably to their deaths. These dogs are really, really dumb. The game’s developer Mojo Bones, on the other hand, is a very smart team. They’ve created a game that’s both charming and challenging, packed it with replayability and promised a year’s worth of free updates. Hard to say no to that.

Updates or no, Tongue Tied is already a complete package. It includes 50 levels, 30 extra challenges, 16 Game Center achievements and one leaderboard. It’s a lot to go through, and it throws a lot of difficulty into the midst. The game uses the ubiquitous three-tier rating system — a bronze is a pass, a silver is for great performance, and a gold is for going beyond even perfection. 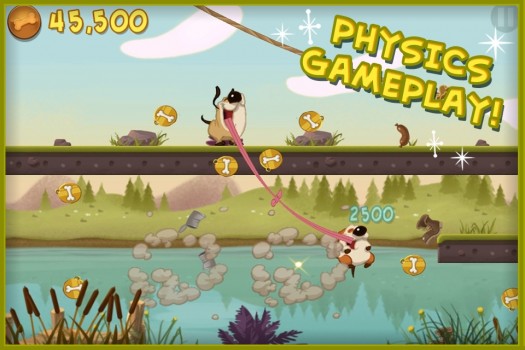 You see, each level of Tongue Tied has bones to collect. You might get a silver if you manage to collect them all, but that isn’t easy. You’ll have to purposefully dive into danger and take risks that should otherwise be avoided if you want to pick up every single bone. Crossing a bridge that will crumble if you pull too hard on Mick or Ralph? There will be a bag of bones hanging over it. If you slingshot just right, you might manage to hit it, clear the bridge, and not fall to your death. But since the doggies will stop for no man, you’ll have to do it without hesitation.

But like I said, that will probably only net you a silver. Want a gold? Teach your dogs some new tricks. You earn extra points for smooth moves, like swiping them around in a full circle, swinging into bags of bones hard enough to burst them, hopping over danger instead of avoiding it, swiping your way over gaps — more complicated maneuvers than are usually necessary. To earn gold you have to play with style. 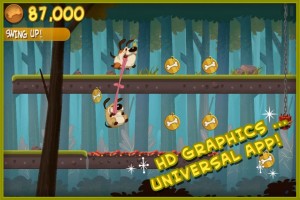 As you’ve probably sussed out, Tongue Tied involves quite a lot of swiping. The controls are intuitive, for the most part. Pull back to launch the dogs, Angry Birds style, if you want get some air time. Swipe a hanging dog back or forth to swing him around. Tap to leave a dog hanging. That’s all there is to it.

This doesn’t always work out perfectly, though. There are times you need to swipe upwards to stick the dog’s head deep in mud (one of many funny visuals this game has to offer), letting his buddy swing freely. Many of the times I tried to pull this off, I skimmed the pause button in the upper right, bringing the game to an awkward halt. Occasionally, the game also doesn’t behave quite like you’d expect — where you might expect to have to tap to drop a dog, he’ll fall on his own, and your tap will knock his buddy down too.

And the game can move just a little too fast. When you’re trying to line up a precision shot to a small platform or tire, having the screen sneak up behind you and block your angle is a huge pain. Sometimes the dogs will get ahead of the game, too, leaving you jumping them into the void ahead of the screen to keep them from falling off a platform at its far edge. These things are rough on Tongue Tied’s difficulty curve, because the levels Mojo Bones expects to be simple can sometimes prove unforgiving.

This becomes frustrating at times. Mojo Bones has taken the excellent step of having deaths restart the level instantly, without even a break in the music. Trying again doesn’t feel like a chore, and the levels are short. But when you get stuck, you’re stuck, and if it happens because the game isn’t cooperating you won’t be pleased. There are times when I’d have killed (or paid) for a level skip, because making no progress over a dozen restarts gets old pretty fast.

Those are occasional problems in an otherwise excellent game, though. The atmosphere is excellent, with gorgeous backdrops, funny character animations, and a lighthearted cartoon soundtrack. The Doghouse unlockables add even more humor to an already charming game, and give players a good reason to go back and try to complete the challenges. It’s enough to smooth over the rough patches. All together, Tongue Tied is a solid package and a fantastic value. Spend some time with Mick and Ralph, then chime in at our discussion thread.