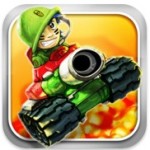 One genre that seems to be overlooked a bit on the App Store is tank games. Sure, there’s certainly a ton of them available for download, but it always seems as if they contain the same boring gameplay, drab military-esque visuals, and awkward controls. Enter Tank Riders [$1.99], the latest title from Polarbit (maker of Reckless Getaway) which attempts to differentiate itself from the rest of the genre with vibrant visuals and objective-based campaign gameplay. Unfortunately, the lack of content, multiplayer issues and frustrating controls keep Tank Riders from reaching its true potential.

At its core, Tank Riders is a somewhat simplistic, top-down 3D tank driving game. Players run through approximately 25 colorful levels (with five additional tutorial levels) with the goal of either getting to the other end of the map or collecting items to advance to the next mission. At the completion of each level, players are scored via a number of categories (such as health and speed) and are ranked via a 3-star system.

Along the way are enemy tanks equipped with one of several weapons along with destructible walls that occasionally hide coins (which boost your score) or hearts (which recover your health). Most levels also feature barriers that require a switch to either be stepped on or shot at in order to proceed. If the core gameplay seems basic, that’s because it is; there is very little in terms of actual innovation. However, it’s important to note that what Tank Riders does offer is implemented pretty well, which can be a challenge in itself. 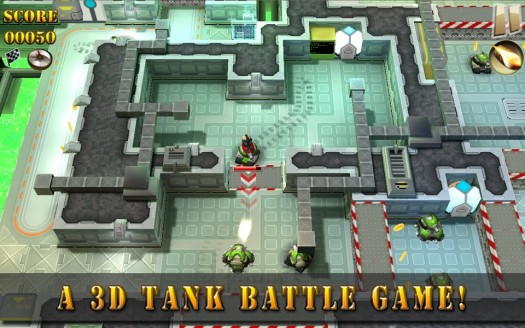 The controls in Tank Riders are one of the more frustrating aspects of the game. The primary control method has movement done via a virtual joystick on one side of the screen. Attacking, meanwhile, is done by touching whatever direction you want to aim around the tank. The core problem with aiming in this mode is that the tank is always centered in the middle of the screen, meaning that if you’re trying to attack on the side with your movement stick, you have to either stop moving and use that hand, or use your opposite fingers and work around your other hand (which is presumably controlling movement at the same time).

Thankfully, Tank Riders does offer an alternative ‘dual-stick’ mode, but you lose a lot of accuracy and speed when using this control option. Considering that some of the later missions require a lot of simultaneous shooting and dodging, the shortfalls in both control options are disappointing.

In addition to the short single-player campaign, Tank Riders also features multiplayer. Normally, I’d expect multiplayer in a tank game to be pretty fun, but unfortunately there are a few flaws in Tank Riders. For one, multiplayer requires registration in yet another online service, and there’s currently no support for Game Center. Even worse, it’s nearly impossible to find a match currently, much less a match with more than one opponent (which really isn’t all that much fun).

To add insult to injury, each match I tried had a certain amount of lag and hit detection issues, which made the matches even more unsatisfying. In addition, there doesn’t appear to be an option for local Wi-Fi matches, which would have been a decent alternative for players looking to play something.

If multiplayer was working properly, Tank Riders probably would have been a game worth checking out. The controls, while annoying, were workable, and the different types of weapons offered some variety in taking out opponents. Unfortunately, without multiplayer, all you’re left with is the too-short single player campaign which can be completed in a few hours and simply doesn’t have enough content to carry the whole game. If Polarbit were to perhaps expand on the single player, Tank Riders might be worth the price of admission. Unfortunately, as it currently stands, you may want to pass on this ride.