Containment: The Zombie Puzzler [$4.99] from Bootsnake Games is definitely not your typical match-3 game. In fact, you don’t even need to match three of anything. Instead, the goal is to surround zombies with cops, soldiers, scientists or punks. This is far more interesting than matching colorful gems, tiles or bubbles, and once you’ve contained some zombies they’ll be eliminated in a blood-splattering burst of gun-fire.

Each type of human unit has a different advantage and a different weapon for taking out zombies. If you surround zombies with cops, you can earn a sniper-shot, whereas soldiers earn grenades. Containing some zombies using punks can earn a molotov to throw, while the female scientists can help you obtain a zombie resistant suit.  Three slots are available for storing these life-saving items.

Containment consists of two different game modes – campaign and survival. In campaign mode, the story is told via short messages super-imposed on the urban landscape during cut-scenes, which take place during the course of the game’s 100+ stages. You’re playing on the dimly lit streets, roof-tops, drive-in theaters and playgrounds of Franklin County, which are all viewed from a top down perspective. The background and character graphics look great, with zombies and characters moving around and calling out for help. 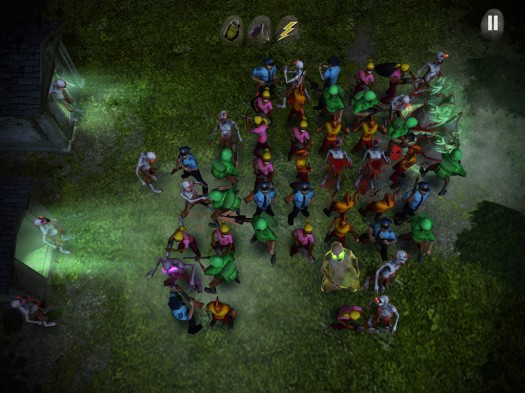 In survival mode, each round is rated based on zombies killed, time taken and number of survivors remaining. The player’s score is shown after each round is cleared of zombies, but for some reason, the final score wasn’t displayed when I finally died, which was a bit anti-climatic after surviving multiple rounds; so I stuck to campaign mode. According to the achievements, there’s 20 city blocks to travel through in survival mode.

The control options include touch or tap for switching the positions of any two human characters, even if they’re not adjacent. And the three weapons slots are activated by swiping them down into the play area to choose a zombie target. If you take too long to play, the undead will attack those nearby, creating more zombies because … that’s what zombies do. When there’s more zombies, they’re harder to surround and contain, so you have to play effectively before you reach the tipping-point of no return.

Another element is touching items in the background to trigger events. For example, touching a trash-can may reveal a weapon to pick-up (perhaps a lightning strike or a napalm strike from a passing plane). However, the trash could just release another zombie. Touching a sign on the side of a building may cause it to fall, squashing those below. Tapping a vehicle may cause it to explode, while other cars drive into the gameplay area itself, running over zombies and humans. These interactions with the background elements can also alter your journey through the levels, as the campaign has branching pathways.

When you kill some zombies, they disappear and all the characters in the playing area shuffle downwards to fill the gaps. A “cascade bonus" is awarded when one zombie execution leads straight to a second zombie killing, due to the humans and zombies dropping down into the gaps. Combos can also be scored by surrounding two groups of zombies at the same time. Game Center leaderboards are provided for ‘Total Zombie Kills’ and ‘Town Hall survival’, plus 24 achievements.