At E3 back in June of this year, we got an impressive hands-on demo of the OnLive service running and playable on the iPad. In case you’re not familiar, OnLive is the cloud-based gaming service that allows you to play from a fairly large selection of console and PC games by way of streaming them to an OnLive client running on your computer or a specially designed set-top box that connects to your TV. In simpler terms, it’s a lot like instantly streaming movies over NetFlix, except it’s video games, and you get to actually play them in real time with minimal lag if you’re internet speeds are up to snuff.

Basically, the iPad demo at E3 showed off just how versatile the OnLive service is. They simply created a client for the iPad and it allows practically the exact same OnLive experience that you would get using the service on your computer or television. It really felt like the future, but today, the future is now! (Sorry, I’ve always wanted to say that). But on a serious note, the OnLive iPad client is scheduled to launch today, as in like right now, for FREE.

There is a catch, however, as the OnLive mobile app is currently only available in the US and UK. There’s no word yet on if or when the service may launch in other territories. As part of the mobile app’s support, more than 25 of the games available on OnLive have been outfitted with touch-specific controls, meaning they can be played directly on the device itself without any additional peripherals. Included in that lineup of 25 titles is Rockstar’s hugely successful LA Noire, as well as Lego Batman: The Videogame, which will actually be available for free for anybody to try out the service just by downloading the OnLive client. 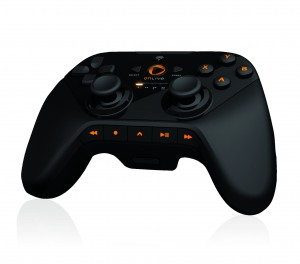 The majority of OnLive’s nearly 200 other available titles will also be playable on iOS, but won’t have the virtual touch controls baked into them. For these games you can pair the Universal OnLive Wireless Controller with your device and play them just like you would on a traditional console, or as demonstrated in the E3 demo video. Not every title will be able to be played on every device, OnLive cautions, but it sounds like the vast majority of them will be fully playable using the controller or virtual button setup.

One cool thing about OnLive is that whether you purchase a game through their service on your iPad, computer, set-top unit, or whatever, it will be available on any of those devices, with full cloud-saving functionality. So, if you’re in the middle of an OnLive game on your TV, you can stop what you’re doing and seamlessly pick up where you left off on your iPad, for example. You’ll also have access to all the social features that are built into OnLive no matter which device you’re playing on.

While the OnLive iOS client hasn’t quite hit the App Store just yet, it is supposed to be arriving any time, and we’ll update this post with a link as soon as possible. Since it’s free and comes with a free game, there’s really no reason not to download it and check it out. If you’re interested in ordering a Universal OnLive Wireless Controller, those will be available sometime soon, and you’ll be able to get it in the US OnLive Store for $49.99 or the UK OnLive Store for £39.99.