Have you ever secretly wanted to live the life of a taxonomer, pouring over the details of new species to discover their histories? No? How about blocks — do you like to play with blocks? You might need to fall somewhere within that spectrum to really appreciate Gua-Le-Ni [$4.99], my new favorite taxonomic game. It’s a rapid-fire puzzle game with a fantastical approach to the vagaries of animal kind.

From moment to moment you’re tasked with the categorization of brand new animal hybrids. While you might be familiar with the dreaded CA-MEL or TI-GER, would you recognize a RAB-HOG on sight? How about a WART-DOR-PUS-STER? Anything goes in Gua-Le-Ni, and you’ll need to be quick enough to go along with it.

You do this with a collection of blocks, like children’s alphabet blocks. Each face of each block possesses one syllable of an animal’s name, and a section of that animal to go with it. So a “Ti" block face would have a tiger’s head, and the “Ger" would have its rear.

The blocks can be turned, spun and moved around to form whatever fantastic beast steps across your screen. You’re given two to start, a reasonable number for learning, but when you’re tired of the fifteenth variation of “Lob-mon" or “Rhi-ster" it will be time to move on. 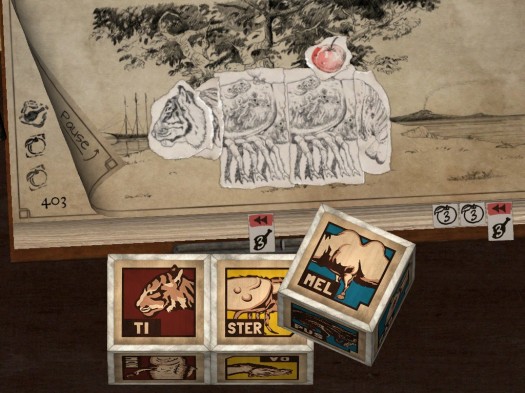 You can do so at your own pace, more or less. In Fiction mode, you can add or remove blocks at will. Four-sectioned creatures may strain your taxonomic talents (and your speedy fingers), but they’re a worthy challenge after some practice. Once you’ve practiced to your heart’s content, you can move on to Non-Fiction mode.

Non-Fiction is no less imaginative than Fiction mode, but the beasts are more beastly and hungry. Some are herbivores, some carnivores, so you’ll need to be on your toes to feed them correctly. There are meals to be made with each combo of three feedings, and bonus points to be earned for them. Feed the animals the wrong foods, however, and it will ruin your combinations.

An odd bit of extra-terrestrial muck can be fed to the animals as well, mutating them into bigger and odder forms. But you must choose to do this — difficulty is not generally forced upon you. The developers at Double Jungle apparently tested the game for biometric reactions in order to ensure that the difficulty curve was appropriate and the cognitive challenge was always sufficient, and this attention to detail shows. Gua-Le-Ni is difficult enough to keep players strung along without indulging in pointless frustration. 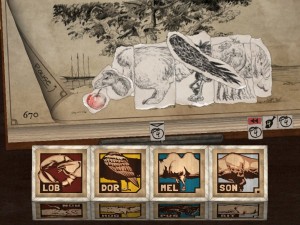 Or at least that’s mostly true. The controls are just shy of perfect, and I have found myself occasionally stymied in a playthrough by a block refusing to turn or rotate as needed. The two-fingered twists and lifts are intuitive, but when they don’t register correctly the joy of playing is lost. Hopefully this will see a tweak or two in the days to come.

Despite that bit of friction, though, I find myself continually drawn back into Gua-Le-Ni. Much of its appeal is aesthetic. The scrap paper creatures are partly horrid in their combinations, but partly gorgeous too. The sound is catchy, and the tome-like interface is elegant and entirely usable. The narration particularly stands out, delightfully dotty as it is.

But the gameplay is no slouch, either. Part of the challenge lies in memorization — the blocks you use are always the same, so once you know where to find the “Ti," you’ll likely never lose it. But managing meals complicates matters, as does the growing speed of the beasts that pass by. Your speed matters too — you earn more points for an animal classified quickly than one that takes time.

Your successes add up into high scores, ranked on two Game Center leaderboards. One is for total score, as could well be expected. But one is cleverer: the time it takes you to earn a Two of Four. That’s two full animals classified with four blocks each in Non-Fiction mode. It’s good inspiration to move up to four blocks as quickly as you can — lingering at fewer blocks slows down your scoring, and knocks off any chance you have of ranking on that leaderboard. There are also a selection of achievements to earn, some clever, but a few too many focused on sharing or rating the game.

Many players will find Gua-Le-Ni a bit steep for what it offers, the rather simple puzzle game at its heart. But for those of you who, like me, are drawn in by its gallimaufry of nonsense creatures, the game will be nearly impossible to resist. Give in — Gua-Le-Ni follows through with charm and plenty of fun. The joy of taxonomy may fade in time, but you’ll always have the knowledge that you were the one to identify the humble Lob-hog-bit, and that’s a memory that will last. Share it in our discussion thread.