Zombie games may not be all the rage right now with gamers, since we’ve been relentlessly bombarded with them over the past few years, but that might change again with Extraction: Project Outbreak [$0.99], the latest game published by Chillingo and developed by ShortRound Games. A top-down shooter with loads of unlockables, a well done control scheme, and great visuals, Extraction looks to offer something for nearly everyone, as long as you can get past a mild case of monotony in the later levels.

The world has grown bleak in Extraction. Experiments on prisoners of war and military personnel have created a viral outbreak turning everyone into a zombie-like state. As a member of a private military contractor, you’re brought in to run a variety of missions that include rescuing scientists, escorting soldiers, defending sentry technicians and simply killing zombies (don’t worry, you get to kill zombies in all the other missions as well). Also, like any good government contractor, you’re rewarded handsomely with tons of cash at the end of each successful mission, which can be used to unlock and upgrade weapons. 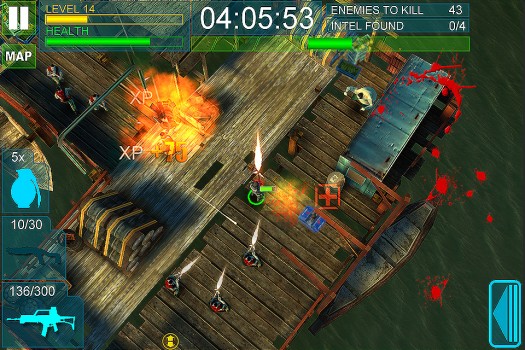 The weapon upgrades system is one of the best and most robust features of Extraction. Players can choose to upgrade their primary (typically assault rifles) or secondary (pistols) weapon trees, with upgrades ranging from increased damage and ammunition to better accuracy and range. Each tree also includes the ability to unlock attack drones and sentry turrets, which add an additional level of strategy to playing out each mission. There is a large amount of upgrades available and each gun actually has a different feel when using it, making you more likely to keep playing simply to unlock everything.

Extraction also has a separate experience/leveling system which allows you to increase your player’s armor, gun skill, and more. One strange choice is the artificial limitation on upgrading certain skills. For example, I never melee, but once I hit a certain level the game won’t let me upgrade other skills until I put some points into melee. However, it’s still a decent system and does its job expanding replayability. 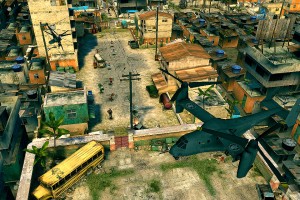 Accompanying the customization system is an intuitive control system that I think works perfectly for this type of game. Players tap anywhere on the screen to move to that location, and when you encounter enemies, you simply swipe across them to aim and fire. If there are multiple enemies on the screen, you can swipe to each one in whatever order you want to set up multiple shots and earn bonuses. The twist, however, lies with the ‘skill shot.’ When you begin a swipe to mark an enemy a counter starts, represented by a red and green bar at the top of the screen. If you successfully swipe across an enemy when the red bar intersects with the green, you will land a skill shot that kills the enemy faster and earns you more experience.

In addition, different weapons also have different skill shot meters, meaning that some guns are easier to land a skill shot with than others. The closest analogy to this system is the active reloading mechanism made popular in the Gears of War series. In any case, I loved the control system, as its one of those rare implementations that manages to make the basics approachable while still reserving some challenge for folks that want to master the skill shot.

One area that Extraction somewhat falters is in its overall mission variety. As mentioned earlier, there are only four main mission types. In addition, there are also a limited amount of environment tile sets. While the difficulty obviously increases in the latter parts of the campaign, each mission starts to feel like you’ve played it before, leading to a lot of unfortunately monotony. While I understand that these sorts of mission-based games are bound to have some repetition, I think another tile set or two would have gone a long way towards alleviating the tedium. As it is, the upgrade system is probably the only thing keeping you trudging through the later missions (although there’s plenty of IAP available to unlock your upgrades faster).

Thankfully, the developer has been pretty active in our forum and has stated that future updates will include a few extra modes to increase the variety (the updates should also address a few crashes related to early iOS hardware). Regardless, Extraction as it stands is still a great game worthy of a play through. If you have any interest in top down shooters, and you’re a fan of extensive unlockables, check it out.