Like it or not, more and more games in a wide variety of genres appear to be taking the freemium route in an effort to be more profitable. Rather than simply taking a binary stance as to the merits of freemium, I’d prefer to look at each game on a case by case basis to see if the developers manage to strike that balance of freemium elements versus playability and, most importantly, fun. Bullet Time HD [Free], the latest title from Kiloo Games, hits that balance perfectly and leaves me hoping that future developers will create freemium games like this.

Set in a post-apocalyptic world, Bullet Time follows John Irish, a man out to rescue his family from the mutated creatures inhabiting the land. You’ll lead John through a variety of locales that look striking and definitely give off a Borderlands sort of vibe. The game looks great and runs amazingly well on an iPhone 4S, although there was some minor slowdown on a 4th generation iPod touch.

Control-wise, Bullet Time plays like your standard dual stick shooter, with no significant positives or negatives to the standard formula. In addition, from a gameplay perspective, you’ll always have a primary mission to accomplish, but the game also throws a few side missions and secret locales at you if you’re willing to look for them. Bullet Time also features a lot of excellent ambient sounds and hard rock music that do a great job setting the tone of the game. From a presentation standpoint, Bullet Time simply rocks. 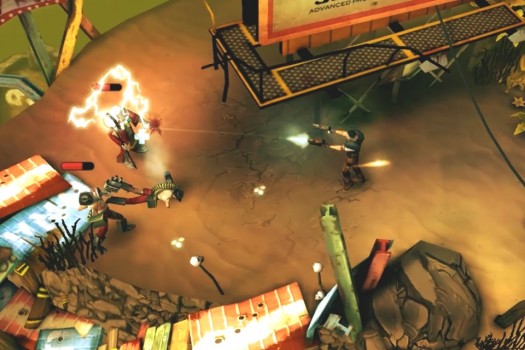 One of Bullet Time’s strengths is in the wide variety of weapons, armor, and upgrades available to help on your quest for mutant destruction. Mr. Irish can take two different weapons into battle at any one time, and each weapon can be outfitted with powers that range from increased damage and critical change to enemy slowdown. Weapons also have various special abilities, such as rapid-fire or piercing, which add an additional strategic element. In addition, there are three pieces of armor you can upgrade, along with five different short-term boosts that you can use during play. Add all this together, and there is a ton of room for customization and replayability.

The freemium elements come into play with Bullet Time’s currency system. As you journey through each mission, you’ll primarily earn silver, which is the main currency in the game. In addition, you’ll also occasionally find crystals, the ‘premium’ currency (you will earn crystals with each level up, too). While a lot of the gear you can buy requires silver to purchase, the top gear for each level typically requires crystals, which can also be purchased via IAP. While you do earn a decent amount of crystals during normal play, there are items that are simply unobtainable unless you purchase extra crystals.

This will undoubtedly irk some folks, but I thought the developers did a great job optimizing the gameplay for equipment obtainable via silver. While some games implicitly require the freemium items for players to simply succeed, Bullet Time instead treats them as premium items that make the experience easier, and maybe a little more fun, which is my ideal view for these sorts of items.

In addition to the single player campaign, Bullet Time also has a survival-based multiplayer mode with up to three gamers playing simultaneously. Players can elect to be paired up randomly with other folks or they can start/join games with their Game Center friends. Unfortunately, I had a lot of trouble trying to start a randomized game, but I was able to try a few Game Center ones. Once I was able to get a game going I found survival mode to be incredibly fun, particularly when I was able to play with folks in the same room as me. You also earn experience and silver while playing survival sessions, which makes multiplayer even more worth it if you’re able to get a game going.

Simply put, Bullet Time gets a lot of things right when it comes to dual stick shooters. The controls, presentation, customization and replayability are all well done. Sure, it would be nice to be able to acquire all the items without IAP, and the multiplayer lobby system had some issues, but those are not game breakers. Add in the fact that the game is free and that the freemium elements are nonintrusive, and Bullet Time becomes a must-play for any fans of the genre. I only hope other developers take note, because this is how freemium should be done.