Today I saved the citizens of Metropolis from a missile launched from an unknown location. I flew into the sky and intercepted it in midair, then beat it to pieces. It exploded harmlessly over the city. But no time to wait for thanks — a car full of criminals was escaping down the stretch of road in front of the Daily Planet. I handled them with my laser vision, if you know what I mean. Then that dastardly Lex Luthor unleashed a bunch of sticky bombs in the city. While I was gathering those up, fires started up on a nearby building. Then the meteors fell.

But hey, Superman [$0.99 / HD] can handle all that. All in a day’s work, as they say. It’s just too bad he couldn’t be doing it in a better game. One that plays a bit less like The Hero, by Traplight Games, perhaps?

It’s not that Superman is a total knock-off of The Hero. The Hero has style, charm and humor, and Superman has laser eyes, optional retina assets and the ability to beat up missiles while riding them. But the similarities are abundant. 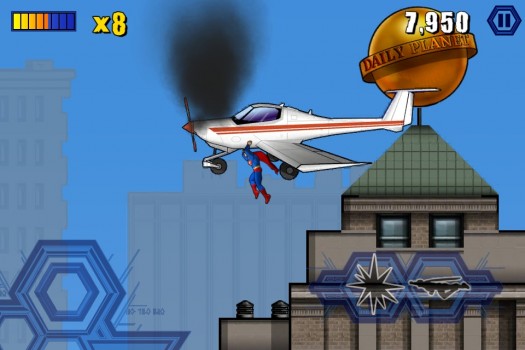 This is the basic gameplay for both games: you fly around a two dimensional city putting out fires both proverbial and literal. You control your flight with a virtual joystick on the left, and a boost button on the right. You have special abilities you can use to do your job better — those also hang out on the right side. You go through waves of enemies and crises while a top bar ticks down as you harm the city or allow it to come to harm (because Superman would never harm something himself). You have to finish each level before the bar runs out, and you’re scored on the things you destroy or save in the meantime. 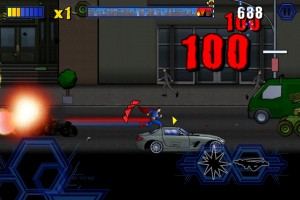 Superman adds a score multiplier to that formula. It builds up as you succeed, and falls when Supes gets hit by an otherwise harmless projectile or lets a target get away. At the end of each level, you’re ranked based on the score you manage to earn.

But even if it weren’t so very similar to The Hero, Superman wouldn’t be a very good game. It has its positives — the flight control is nice, and the control that handles your laser vision is conveniently contextual, changing to the control that punches dudes or picks up cars as needed. And you get to play Superman, if that’s your thing.

The negatives just pile on, though. The missions are long and samey. Save a plane from dropping on Metropolis? Cool, you’ll do that ten more times over the course of the game. You’ll shoot up the same Luthorian police force every few levels. And it’s not like the things you’re doing ever really make any sense. You need to destroy these cameras/bombs/comets/fires around the city because, whatever, Lex Luthor, am I right? Unless Lois Lane telling you there are criminals on the run is your idea of a great reference to a beloved property, there just isn’t much to love.

A couple levels manage to rise above the rest of the familiar, boring schlock. Those with boss fights can be fun, although they highlight the limitations of the controls (flying and shooting moving targets at the same time gets extremely awkward). And there are a handful of time trial levels peppered throughout, which just let you fly and fly and fly. Those are the good times.

Ultimately, if you love Superman and you miss the days when arcade games didn’t bother with all that story nonsense and just let you get straight to beating stuff up, you might get something out of this game. If not, it’s certainly a fun diversion at times. But if you’d like to see the same game done better, get The Hero. It’s starting to show its age, but even so the love with which it was crafted still shines through — more than I can say for this take on the Man of Steel. Either way, drop by our discussion thread and let us know what you think.