No one can deny that the advent of Angry Birds made a permanent change to the way people saw iOS gaming. Since its debut in December 2009, the simple bird-launching game has made approximately 27 boatloads of money, and continues to rake it in with merchandise sales such as plushies and more. Naturally, other designers were bound to try to imitate the formula and appeal to the gamers who were hopelessly addicted to hurling birds at pigs. And with that, clones were born.

Snappy Dragons [99¢/Lite/HD/Lite HD] is an Angry Birds clone, through and through. But I have to clarify, because at this point in the post-Angry Birds landscape, there are many different categories of clones, so it’s essential to explain what exactly you’re getting into. Well, aside from throwing stuff at other stuff. 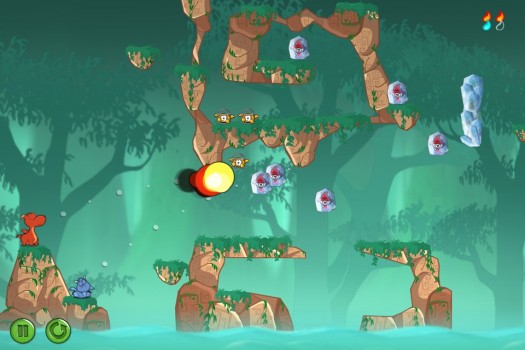 Snappy Dragons has a very simple premise, just like the game it’s inspired by: Evil wizards have kidnapped adorable baby dragons, and it’s up to you to save them. To do so, you’ll need to progress through a series of levels (80 in total across four different worlds) that present the basic challenge of taking out the wizards and saving the baby dragons. Luckily, you have a handful of fireballs at your disposal, so that helps your quest considerably. You also get to choose which dragon you play out of four, which has pretty much no effect on the actual game but hey, you look cool.

As you progress through the levels, new challenges will be introduced such as dragon cages which you can destroy for extra points. Controls are responsive when it comes to aiming your fireballs and trying to nail the perfect arc, and its still fun to make your way through the levels. It all feels familiar, which is probably because the formula is shamelessly copied from Angry Birds, but if you crave more of that gameplay, you will certainly enjoy making your way through Snappy Dragons.

There are also bonus levels sprinkled throughout the game too, which help to break up the level-by-level formula and let you go on a wizard-killing rampage. It’s strangely satisfying to never run out of fireballs, as they are limited in all the regular gameplay levels.

The game has a cheery feel and the art style is perky, with wide eyed dragon babies blinking innocently while they wait for you to save their lives. It’s nothing that you’ll rave to your friends about, but you will likely enjoy it in that way that a familiar thing can be rewarding (kind of like my shaming and horrible addiction to all Zuma games). It also has built in Facebook and Twitter support, so while you may not need to rave about how unique Snappy Dragons is, you can at least brag about your high scores to your friends. And since bragging seems to be a golden quality among most gamers, it’s sure to please those of you who enjoy doing so.