If you’re familiar with mid-90s video game history, then you might remember a not-quite-released title by the name of Penn & Teller’s Smoke and Mirrors. The game was an odd puzzle platforming affair starring the famous comedian magician duo, as well as a collection of mini-games that were designed for pranking your friends. Originally slated to arrive on the Sega CD in 1995, the publisher of the title went out of business that year. That effectively shelved the release for good even though it was basically in a complete state, however, the unreleased game did eventually leak out into the wild.

Easily the most notorious mini-game from Smoke and Mirrors is Desert Bus, which tasked you with driving from Tucson, Arizona to Las Vegas, Nevada… in real time. The feat takes about 8 real world hours, and since the game can’t be paused, the trip must be completed in one sitting. If you manage to accomplish this, you receive… one point. One measly point. Then, you’re given the option to drive back to Tucson, which takes another 8 hours, in order to get… another point! You can keep going like this as long as you’re able to, until you reach the maximum 99 point limit. Which would take about 41 actual days of non-stop virtual driving. Right, let me get right on that. 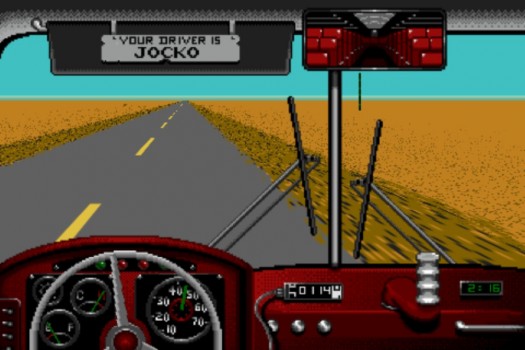 While I don’t have the gumption to sit and play the most mundane video game ever created for hours on end, better people than I have come up with a brilliant idea called Desert Bus for Hope. This is a marathon gaming session of Desert Bus put together by the group LoadingReadyRun, where people can donate money to force the members of the group to play Desert Bus for extended periods of time, with all proceeds going to Child’s Play charity. Since the first marathon in 2007, Desert Bus for Hope has raised over half a million dollars for Child’s Play, and this year’s marathon is happening as we speak.

In support of Desert Bus for Hope, developer Amateur Pixels has released a port of Desert Bus [99¢] for iOS and Android, and all the profits from selling the game on the Apple App Store and Android Marketplace will go to the Child’s Play charity along with the money raised during the marathon. Just think, you can fit all the action of driving in a straight line for 360 virtual miles in your pocket to enjoy anytime, anywhere – even while you’re actually driving from Tucson to Las Vegas in real life! The future! 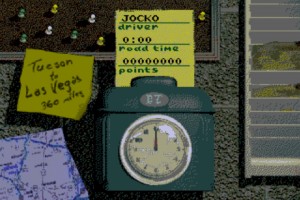 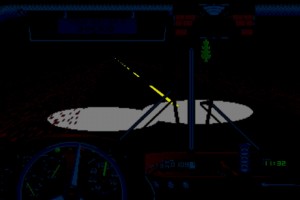 Desert Bus on iOS is a pretty faithful port of the original, and it is almost like having a little piece of strange gaming history in your pocket. While not exactly a fun game, I think the novelty factor is well worth the price, and still think the concept itself is just brilliant. Plus, you can feel confident that your hard earned monies are going to a good cause, helping children through Child’s Play. Definitely check it out, and if you’re feeling especially sadistic, swing by the Desert Bus for Hope donation page and throw a few dollars their way to help force some schmuck into yet another straight hour of Desert Bus torture.