Needing no introduction for any iOS Action fans, the Gangstar series has been Gameloft’s answer for folks looking for the city sandbox experience popular on gaming consoles. While we enjoyed the previous two Gangstar titles, there were outstanding issues in both games that prevented each from becoming a truly ‘must-own’ title. With Gangstar Rio: City of Saints [$6.99], Gameloft looks to up the ante in all aspects from the new location to cleaner graphics to even a new character advancement system. While Rio falters in its voice overs and the overarching story, everything else makes this the best Gangstar yet.

Gangstar Rio continues the tried and true gameplay of previous titles that closely mimics the gameplay of sandbox games like the Grand Theft Auto series. All the elements from previous games – from the mission based main story, to the large amount of collectibles, to even the side jobs attached to various vehicles – make a return. However, Gangstar Rio improves on its predecessors by making everything just a little bit better. For example, the Rio de Janeiro locale seems to be bigger and is a lot more unique compared to the previous locations. The entire world just feels more alive than previous titles. In addition, the developers have improved the controls by adding a few new options and tightening the existing schemes. However, I was extremely disappointed in the lack of cloud saving/syncing as that should be an essential requirement for lengthy games such as this (moreso since Rio is a universal title). 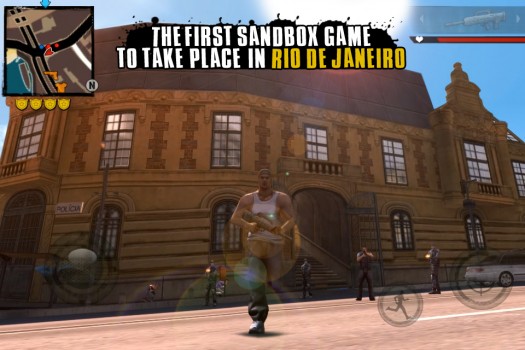 Another new feature to the series is the clothing system which works in tandem with the experience/level up system. In addition to gaining experience and earning ‘Respect Levels’, you can now also buy clothing which changes your appearance and provides additional perks beyond the typical stats that you increase with each level up. Some of the perks include ‘Luck,’ which increases the amount of looted money and ammo from enemies, and ‘Look’ which makes it harder to increase your wanted level. This is a significant leap forward from previous Gangstar titles, as there is now more motivation to simply enjoy the sandbox environment and earn exp and money in addition to playing the missions.

Graphics-wise, Gangstar Rio also improves upon the previous two titles. While Rio isn’t the nicest title we’ve seen on iOS, its visuals look much better compared to the previous Gangstar games. In addition, the game loaded extremely quickly and the framerate was relatively smooth (at least on an iPad 2 and iPhone 4S). Gameloft also did a good job improving the building pop-up, an issue we had in previous games. However, it’s important to note that your experience may vary based on the model of iOS device you have, and things may not be as smooth on earlier generation systems.

Gameloft also does a good job in nailing the music in Gangstar Rio. There are several radio stations, each with a decent selection of music. Personally, I could care less about name recognition so long as the music simply sounded good in the flow of the game.  Thankfully, most of the songs succeed in that regard. I did think that the developers were trying a bit too hard with the fake radio commercials, but otherwise, the radio was definitely a plus.

(PSA: Some foul language in the trailer):

Unfortunately, despite all these improvements, one area that Gangstar Rio seems to take a step back in is in regards to its story and voiceovers.  The story is your typical riches-to-rags-to-riches-again novella that really doesn’t have any originality. Granted, I’m not expecting a literary masterpiece while I’m planning a drive-by, but it is one of the weakest parts of an otherwise decent gameplay experience. The voice acting, meanwhile, is by far the worst part of Gangstar Rio. Horrid accents, low sound quality, and simply atrocious acting make the voiceovers so bad that it’s almost funny. In fact, I honestly don’t know if the dreadfulness is a deliberate ploy or not. Either way, it’s one of the few dark spots in Rio.

Regardless, I understand that most folks aren’t playing these games for the voice acting or even for the story. The most important question is whether Gangstar Rio is actually fun to play. The answer to that is definitely a ‘yes.’ Rio’s improvements to the core gameplay system, combined with better visuals and good music make this game the best yet in the series. However, much like the previous iterations, there are a few issues that prevent the game from living up to its full potential.