Raccoon Rising [99¢] from Romper Games is a delightful game about a sleepy raccoon trying to survive when his forest is invaded by an army of robots and their deforestation machinery. After watching the trailer (below), you might expect an endless-vertical jumping game, as it resembles NinJump [Free/HD]. But, it’s actually more like a vertical platform game, because you’re not constantly jumping and can find places to stop and plan your approach upwards, through the obstacles. Also, it’s level based, so you’re not always restarting from the very beginning.

The little raccoon’s simple story is told through comic-strip cut-scenes as he journeys through four worlds, including a temple, Tanuki forest, a ship called the ‘Salty Sprocket’ and finally, a city. Each world features different graphics, music, enemies and obstacles, but the goal is always to progress upwards until you reach a gate, which shuts behind you. 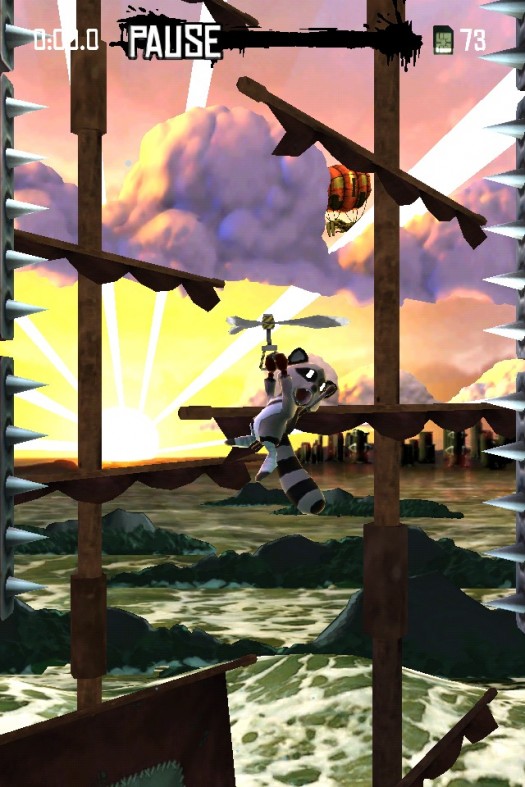 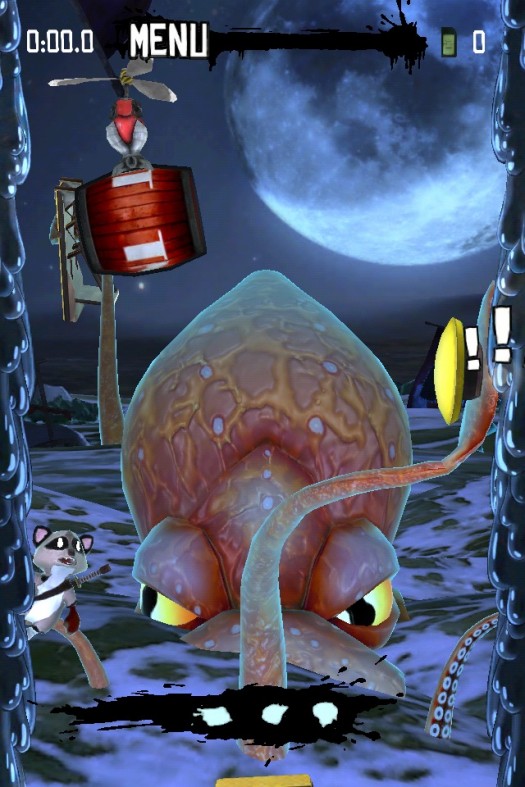 Each time you reach a gate you’re given a three-star rating for your performance on that section and a checkpoint is saved as a re-spawn point when you die. There’s over seventy gates (sections) in total and as you unlock them in the main story, they become available in Time Trial mode. Each section may only require a few jumps to pass through, but it typically takes multiple attempts to determine and execute your route. However, because there’s only a short distance between gates, dying and re-trying isn’t the end of the world.

The gameplay controls are simple and effective. Just  tap anywhere to make your coon jump in that direction, or hold down your finger for a power-jump, which enters slow-mo mode for targeting and smashing obstacles with flying kicks. If you’re jumping upwards, a second tap sends your raccoon leaping to the side of the screen, depending which side you tap. The real challenge is to time and aim your jumps well, as you often need to land in tight spaces, wedged between two death-causing obstacles, which may both be moving. However, the pause button (which is a slider) is not always that responsive and sometimes stops working altogether, meaning it must be closed form the iOS task bar. 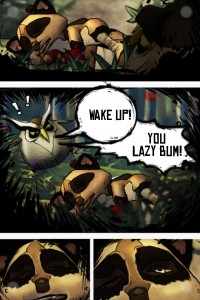 The robots have deployed a range of machinery, so as you journey upwards you’ll face spikes, tree-crushers, band-saws and cannons. There’s punching cushions which repel you, hovering platforms, gun powder-barrels to explode and helicopter drones to jump on for a quick ride upwards. And once you reach the end of a world, there’s a boss fight waiting for you.

The 3D art and animation by Pixelnauts is appealing. In particular, the special effects – such as timber or the coon flying straight at the screen – look great. And the little raccoon character, with his blackened raccoon-eyes and wagging bushy tail, gives this game a feel-good atmosphere. However, although the end-of-world bosses were satisfying to reach, they don’t look quite as vibrant or visually appealing and the comic images also fall a bit flat. The initial loading times for worlds are also a little longer than most games, but there’s no such delays between stages (gates).

There are credit-card chips (“credits") to collect within each world, because you “may need them in future". If you click on the credits icon on the main menu it says “coming soon". It’s a little unusual to ask players to collect in-game currency which has no current function, but trust me, the credits will be used for something cool in a future release: – but that’s still a secret, so we can’t share it yet. But we can confirm that the developers are keen to expand this game further.

Romper Games have fixes coming for a couple of technical issues: There’s a glitch whereby the third level (Ship) doesn’t always unlock when you reach it. I replayed the final stage of world two and it unlocked successfully, however another user in our discussion thread have had the same issue, but replaying it hasn’t helped. Crashes have been reported for older 1g / 2g devices. The developers are participating in our forum discussions so they’re aware of these two issues. They may release reduced graphical assets for older devices and are working on a fix to resolve the level unlocking glitch.

Racoon Rising is a neat variant on jumping games, which I’m throughly enjoying despite the jumping genre being so saturated. The combination of vertical platformer and jumping game works a treat. And the core graphics, varied worlds and short re-playabe levels make this game easy to recommend, but if you’ve got a 1g / 2g device, you may prefer to wait for the update.