It’s the little things that matter. You know what I’m talking about, right? It’s not the bacon that he brings home, it’s the breakfast he wakes you up with. It’s not the fact that Ravenmark: Scourge of Estellion [$2.99] is probably going to be one of the definitive names in turn-based strategy for the iOS, it’s the way the commanders bellow at their troops to merit their wings.

Food metaphors aside, there’s a lot to like about Witching Hour’s debut title. If you’re anything like me and have spent some amount of time bemoaning the paper-thin worlds that populate the App Store, Ravenmark: Scourge of Estellion is going to make your heart beat faster. The setting is exhaustive. Every character has a detailed biography, every unit type a set of statistics and a matching description. There are social hierarchies, self-serving matriarchs and imperial ranks. There is history. There is substance.

Paradoxically, the actual plot itself feels a lot less deep. You can blame it on a childhood diet of Ursula K. Le Guinn and Terry Prachett but I can’t shake the feeling I’ve seen it all before. The first part of the game, for example, is centered around the soft-spoken Calius Septim. Determined to make his way up the ranks, he must deal with things like an overprotective older brother and a superior officer who loathes him. It’s a familiar story, one that has been related a thousand times before in various forms. Nonetheless, that doesn’t make the tale any less compelling. 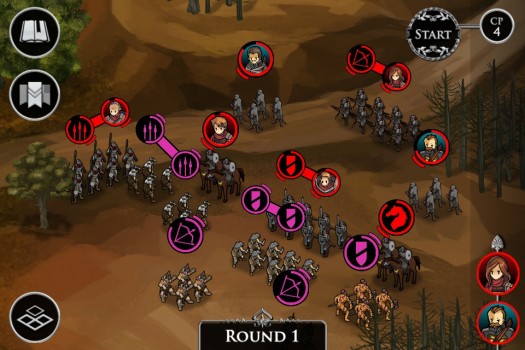 Delivered in a visual novel-esque manner, Ravenmark: Scourge of Estellion’s greatest strength lies in the fact it is not pretentious. The protagonists are not larger-than-life heroes; they’re men. They’re people we can empathize with. While it is doubtful that the dialogue will win the Pulitzer prize anytime, it’s still some of the best I’ve recently seen. You will care about them, regardless of whether you intended to or not.

But let’s get to the real reason you’re reading this. An exquisitely-crafted world is good and all but is Ravenmark: Scourge of Estellion fun? The answer to that is: it depends. Did you want something you could fiddle with and forget while you’re on the bus or the loo? If so, you’re not going to be very happy with what the Witching Hour has to offer. Ravenmark, to put it succinctly, is heavy stuff.

Utilizing a rock-paper-scissors (swordsmen beat spear-men, spear-men trump cavalry, cavalry wins over archers and archers have the edge over swordsmen) sort of approach to things, battles in Ravenmark are played out through a series of turns. Each round consists of two rather self-explanatory phases: the Command Phase and the Battle Phase. In the Command Phase, you give orders. In the Battle Phase, you watch as they’re carried out. Units will move. Abilities will be used. If they find themselves within range of one another, they will attack; an action that consists of nothing but some artwork sliding around and numbers dwindling where appropriate. 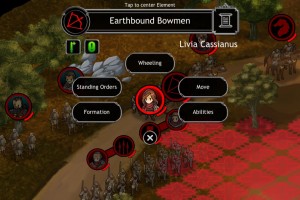 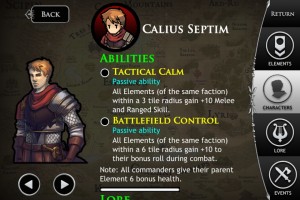 Simple as that might sound on paper, the reality is significantly more complex. To begin with, you’ll never have enough Command Points. You’ll also have to ensure that you’re constantly aware of the order in which the various units will move. One false move and you might find your foe neatly eluding your grasp even as you beat your head against the wall. On top of all that, you’ll also have to worry about being flanked and whether your army’s current Formations are sufficient for its needs. Do you break up a Formation into Daggers to allow for greater mobility or do you make use of the raw strength that such a contingent can offer?

If that wasn’t enough, you’ll also have to take geographical constraints into consideration, worry about active skills and passive abilities and give Standing Orders whenever appropriate. The Standing Orders battle system is a stroke of minor genius, by the way. With a Standing Order, you’ll be able to command a unit to pursue an enemy till it or the foe dies, or to rest until it has recovered much-needed HP.

It’s an absolutely glorious mess of details. The in-game tutorials are informative and well-done. The controls are exquisite; the large buttons and concise radial menus make me want to name my first-born child after the UI designer. The gameplay, once you’ve mastered its nuances, is a complete and utter joy; Ravenmark gives me honest-to-god, no-hyperbole-intended hope for serious iOS gaming. Sure, you’re going to find yourself beating your head against a wall in frustration whenever you find yourself outmaneuvered by the infuriatingly clever AI, but the satisfaction of a hard-won victory is incomparable. Ravenmark probably would have benefited from a few customization options or even just the ability to select what kind of troops you want to bring into battle but those are minor quibbles. Nitpicking, if you will.

I seriously couldn’t be happier. Witching Hour’s maiden project Ravenmark: Scourge of Estellion is almost everything this iPhone-touting strategy game aficionado could ask for, and as long as you’re a fan of its somewhat hardcore nature, I will eat my fuzzy hat if you don’t find yourself thinking the same.