This past weekend, Elite Systems released their third round of 8-bit games brought to iOS through their Elite Collection of 8-bit computer games effort. The three games in question are stand-alone titles and each comes in both an iPhone and iPad “HD" version.

One of the better scrolling shooters to appear on the C64 was Denaris [iPhone, (iPad coming)] by Manfred Trenz. Published by Rainbow Arts in 1989, Denaris was a re-release of the previous year’s R-Type-alike shooter, Katakis. 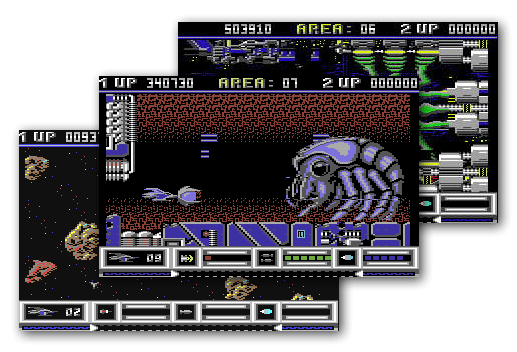 Denaris pits you and your craft against a slew of evil robot enemies that arose from a typical Skynet-type scenario. (Silly humans.) Like R-Type, Denaris features multiple side-scrolling levels, plenty of asteroids to dodge, power-ups, and end-bosses.

The Denaris releases are available in both English versions and “DE" German language versions. A video of Katakis (the same game) playing on a PC under VICE emulation can be seen here.

The star of these releases is certainly Andrew Braybrook’s Paradroid [iPhone, iPad] one of the most well loved games ever released for the Commodore 64. Originally published in 1985, Paradroid puts you aboard a large space vessel, in control of the “Influence Device," a special droid that must roam the many rooms and decks of said craft and destroy every other droid on the ship. All of the droids on board, including your own, have a certain power level indicated by an integer — the higher the number, the more powerful the droid.

Each deck of the ship features a variety of rooms, doors, elevators, and computer terminals that can provide useful information about the ship. You can destroy enemy droids by shooting or ramming into them, though droids much more powerful than your own present a rather significant challenge. It is possible to take over another droid (even a more powerful one) by way of a timed mini-game, featuring logic gates and circuit diagrams, that challenges you to out-wire the enemy droid.

Paradroid is a highly unique game that has something of an eerie feel, for lack of a better word, and significant replay value. 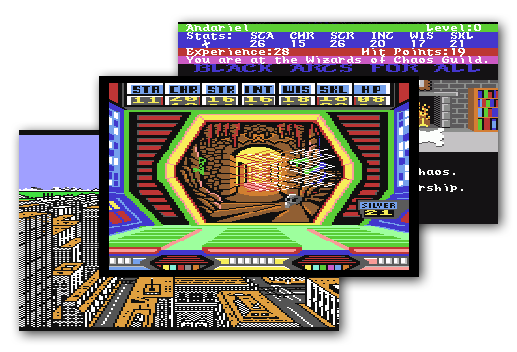 At the beginning of the story, you find yourself captured by aliens and standing in front of a gate with a row of changing attribute values. When you step through the gate, the attributes freeze and you have become a new person in an alternate reality, possessing the attributes shown. While The City is played in an open area, The Dungeon takes place in the confines below the city and features improved graphics over the original.

Gameplay involves freely exploring the very large game world, interacting with a variety of characters along the way, and keeping your vital attributes in balance. Interestingly, some of the attributes of your character are not revealed to you, the player, directly, but can be gleaned through the manner in which other characters interact with you — such as your character’s alignment (good, evil, or neutral). It’s a very open and free play experience, and perhaps to a fault; there is really no story behind the game and there is no real stated goal other than to interact with the vast game world and amass experiences there.

A bit of gameplay of the Atari 8-bit version can be seen in a somewhat rough video here.

NOTE: Denaris HD and DE HD are still in review at Apple. They should be available shortly.