We spied Oh! Edo Towns [$3.99/Lite] on the App store in early September, and ever since, I’ve been wringing my hands in anticipation at the thought of a new Kairosoft game to fill up my free time. After all, Game Dev Story earned our coveted five-star score, and we’ve enjoyed the clever and cute take on the pleasures of city sims every since. Throw in my slight obsession with historical Japan, and then tell me I get to build my own town in Edo-period Japan, and here you have a very excited gamer. Can I be a shogun? Paint some ukiyo-e? Maybe even thwart Saigo Takamori before he reaches the borders of my humble town?

In all seriousness, though — if you have ever played a Kairosoft title, you will know what to expect here. Oh! Edo Towns follows the formula of the previous games by kicking it off giving you your own plot of land to build up into something spectacular. Considering the theme, everything plays on Japan’s Edo period, from the ability to build things like Public Baths and Dumpling Shops to small details such as character dress and design. If you’re a fan of Japanese history, as I am, you are sure to have a soft spot for this one. 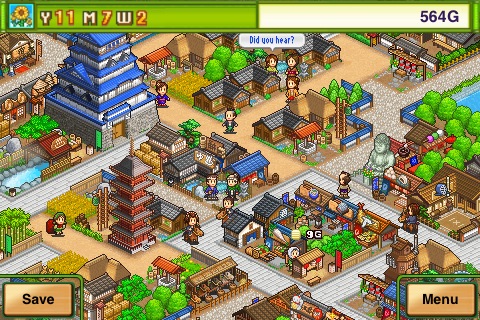 Just in case you have never played a Kairosoft sim before, here’s how it works: the clock ticks as you survey your land and make choices about how to build it up. A full menu is available at the touch of a finger, and from there you can build everything from fields for crops to homes, and even eventually castles. As you make your town more appealing, more people will move into it, and as you build more structures that your residents can use to educate themselves, such as libraries, they can then better themselves and therefore benefit the town and boost your ‘Yield" (meaning how much money your town makes).

To keep the flow of your town building going, you’ll get periodical updates from the local newspaper. This is Kairosoft’s gentle way of nudging you and giving you hints as to what to do next, such as what to build to help your town prosper. Oh! Edo Towns is a great game for anyone with a hardcore case of OCD (cough, cough) because you can also examine the stats of your residents, town, buildings and finances at all times and analyze how it can be improved. 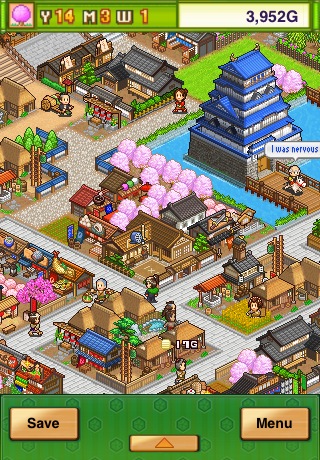 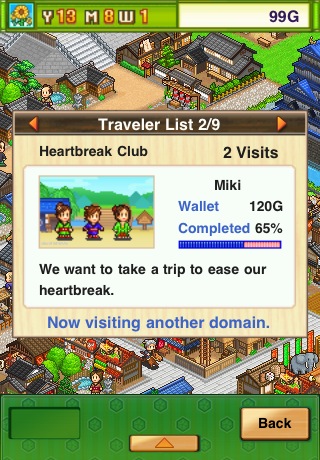 Keep working, and your town will grow into a burgeoning community. The pace is well set and helps to allay boredom by keeping updates consistent as your new residents move in and your town flourishes. Planting trees and other landscaping near buildings or paying close attention to what buildings are compatible with one another is a key tactic to making sure your town ranks high when the time comes around to win some awards. Get to buildin!

The only pitfall I can see when it comes to Oh! Edo Towns is someone saying, “This is the same game as the others with a new skin." Technically, they would be right, as it does follow the same formula, though the flow of gameplay and hints are better than ever before. If you’ve had enough, you can probably replay the ones you played before. On the other hand, if the idea of having a slew of new possible combos at your fingertips to transform your little town into a booming rural metropolis makes you salivate a little, what you want is here, and there’s even a brand new lite version to try out. Time to carve your own spot in Japanese history, my friends.