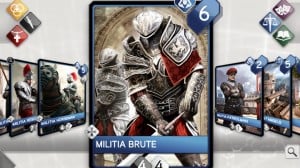 Assassin’s Creed, as far as I can tell, is about stabbing dudes and pushing down NPCs while on the way to stab more dudes. The upcoming board game for the iPad, on the other hand, is about building a beastly deck of cards and pummeling dudes into submission and taking their territories in real-time. Intrigued? We still are, even though the new details out there are still pretty vague.

IGN recently got their hands on with Assassin’s Creed Recollection and are reporting that it features several mechanics from other collectible card games, but fiddles with pacing by introducing a “looping timeline" as seen in, say, Lumines. Cards apparently have the power to attack players or seize a territory, so that’s how the action part of the game works, at least.

Ubisoft is still tossing out phrases like “deep tactical gameplay" and “challenging political battles" in regards to what Recollection will offers, but we’re not sure how it’s going to execute on these promises. We’d look to the new trailer to see what’s up, but Ubisoft is still in full-blast mystery mode for its November-bound game.

Regardless of the lack of intel, this continues to be something our all-seeing eye is keyed in on. Assassin’s Creed fans should definitely stay with Recollections, too, as it’ll deliver collectible assets from all the games, as well as reconnect you with characters and “memories" from Brotherhood and Assassin’s Creed 2.