Wizardry is a series with a pretty long history, and the older you are, the more of it you’re likely to recall. Thirty years after its original release, gamers still think of the same thing when they hear the word: a long dungeon crawl in the dark, careful stat management, and a pen and graph paper by your side. In fact, Wizardry was really the first graphical incarnation of the Dungeons & Dragons model, and gamers familiar with it would feel right at home on those subterranean treks through poorly lit mazes.

Fast forward to 2011, however, and you may see a game like Wizardry as nothing but an exercise in punishment. Or would a clean-up and polish of the interface make for a more modern experience? This version of Wizardry, called Labyrinth of Lost Souls [Free] ($9.99 IAP unlocks full game), is not exclusive to iOS — it’s already seen its original debut on the PS3 earlier this year.

At that time, my impressions of it were that it was presented beautifully and had gorgeous art, but offered the exact same type of experience that its namesake was so well known for. For hardcore fans of the dungeon crawling genre, this was great news, but what about new players who would be facing the genre for the first time? Did they have any hope of enjoying this game? 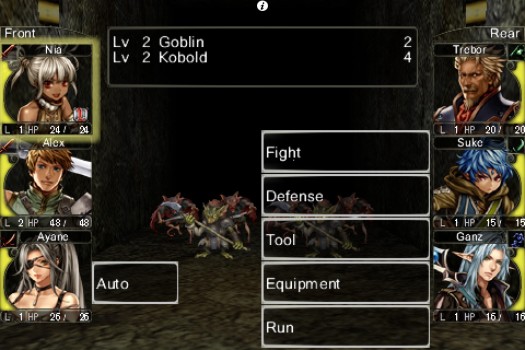 Simply put, Wizardry is just a hardcore game. Check it out on iOS, and you will find it is almost exactly like the PS3 version, with two small differences — it’s Game Center enabled, and the lovely detail of the art is more or less lost on the iPhone’s tiny screen. I think the game would be much more enjoyable on the iPad if you chose to get it for a portable device, but if you had access to all options, PS3 would be the way to go. It’s clear lots of attention and effort was put into the art, and it’s a shame to see it all tiny and squished up on a little screen.

Gameplay is — well, it’s okay. It’s like every other dungeon crawler of this type you’ve ever played, and it doesn’t deviate by a hair. You choose what sex and race you want to play from a small selection, choose your alignment and finally your class. Head to town, get a quest, and choose some recruits to go down in the dungeon with you. If you’ve never played a Wizardry game before, you may not be aware how crucial this initial party structure is. If you choose poorly, you’ll get hammered, even for your first journey into the dungeon. One thing that has stayed true to form in this modern version is the learning curve — absolutely steep. 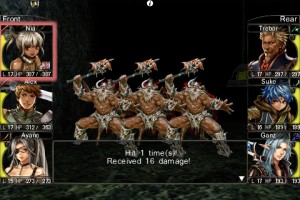 I believe that thirty years ago, stumbling around in the dark with no map (unless you buy one in town) and repetitive battles with large groups of enemies might have been exciting, even inspiring as you struggled to get your bearings. After all, it was all so new then. It’s the same formula here, and people who loved doing it then may enjoy Wizardry now. That being said, any modern gamer is sure to throw up their hands in frustration.

Tapping the darkness in front of you works just fine to navigate these underground tunnels, but it doesn’t necessarily make it fun. Menus are also set up in a way that makes you spend a ton of time jumping in and out of them, which is no big deal for a seasoned RPG player. However, I found myself stabbing at the screen with my finger here and there, and I wished the controls could have been a bit more responsive, especially in the dungeons.

The hard thing about Wizardry is that the gameplay experience it offers can be fun and satisfying if you put effort in, if not somewhat generic. On the other hand, the format will alienate many gamers, but that is what the genre is and will likely always be, so this cannot be blamed on the game.

“Not for everybody" is probably the best thing I can say about a title like this. On the other hand, if you cut your teeth on this stuff back in the day, slipping into Labyrinth of Lost Souls may feel like putting on a well-worn glove. Accepting quests and gathering loot, or even grinding to level your characters, can still be appealing and surely fulfilling for the right gamer. However, since most gamers are not used to working so hard to keep their characters alive anymore, I believe Wizardry will satisfy a very limited audience. The game demands a high level of competence from the people who choose to play it, and there is no hand holding whatsoever.

In an age where we are literally led through our games, often with more instruction than necessary, Wizardry stands as a testament to the games that may have made us gamers by a very different set of standards.