Growing up, I had one of those grandfathers that was obsessed with gold and keeping money out of the banks. He used to show me these little pieces of gold he had and would be like “If you work hard, all this can be yours.” (In other news, my grandfather may be Scrooge McDuck.) As such, I’m sure he would be a superfan of Colorbox’s Peak Gold [$.99/UHD], a fun little hooking game dedicated to the pursuit of gold.

Peak Gold might be lacking in coherent tutorials (sample text: “Reach 1000m depth and collect Big Diamond to PEAK GOLD!”), but it makes up for it with cutesy graphics, fun hooking action and challenging levels. Seriously, for being marketed as a casual game, this sucker is difficult. The premise is simple enough; tap the screen to grab gold and other goodies while avoiding bats and rocks before running out of time. 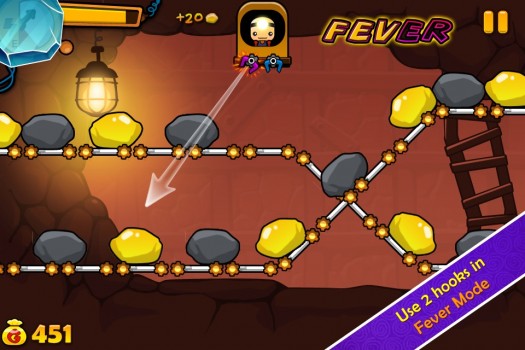 You play as a cute little miner (not to be confused with minor, just so we’re clear) in control of a crane that shoots out hooks. Gold, rocks, and gems pop out of a little hole in the wall and fall onto a conveyor belt at varying speeds, which pick up as you progress. As you successfully hook gold and gems, your ore meter fills up. Once that’s full, your energy bar (a timer, for all intents and purposes) slightly refills and you go down to the next depth, in search of the fabled Big Diamond. If you run out of energy, the game is over.

The gold you accumulate over your games lets you buy upgrades, which is the only way you’ll be able to progress over time. These upgrades are incredibly helpful and can double your time per round, increase your hook’s speed, and increase the amount of gold available to you, among other things. I personally was unable to get past depth three without upgrades. The aiming is difficult (though the controls are good!), the objects move by really quickly, and picking up things like rocks slows you down significantly.

If you’re lucky enough to get several good objects in a row, you might activate FEVER mode, a temporary mode where all objects are turned into gold and you’re given an extra hook in order to score even more gold. However, activating FEVER is no guarantee that you’ll pass a level, and it can be tricky to get enough combos to activate it in the first place. No one ever accused mining of being easy!

There are relatively few complaints to be had, and most have to do with personal preference. For example, some players may find being forced to return to Depth 1 over and over again a bit annoying, as there’s no way to select levels even after you’ve beaten them. So if you’re particularly bad at Depth 4, you’ll have to replay the first three depths just to try it again. If you’re playing over and over again it would probably get a little repetitive. Personally, I found myself picking this game up when I had a few minutes here and there, so it didn’t get too boring for me. Additionally, there were initially some slight audio issues, though those appear to have been fixed recently.

If you’re a fan of hooking games, this one is as good (if not better) as any. It’s fun and challenging without any of the dangers associated with real mining (except perhaps mesothelioma, though I’m not sure there’s a connection between it and Peak Gold). I would certainly recommend it to fans of hooking games, my grandfather, and any hooker with a heart of gold.