There’s something particularly apt about the timing of the iPad release of Greed Corp HD [$4.99]. While Occupiers around the world freeze and protest sociopathically greedy behavior by major corporations, Greed Corp explores the ultimate end of that behavior. What happens when you’re so bent on profit that you’d destroy even the ground under your own feet to keep the other guy from getting it? Greed Corp has the answer.

It’s a turn-based strategy game that encourages players to engage in something one step shy of mutually assured destruction. You destroy the lands you harvest, and firing on your enemies crumbles away the ground beneath them.You win as long as you have at least a single unit on a single hex and your enemies don’t. This brutally aggressive game first made its debut on Xbox Live Arcade and the Playstation Network in the early months of 2010, but it’s hardly aged in the time it’s taken to arrive on iPad. It’s also extremely well done for the most part, offering a natural touch interface and both single and multiplayer content. 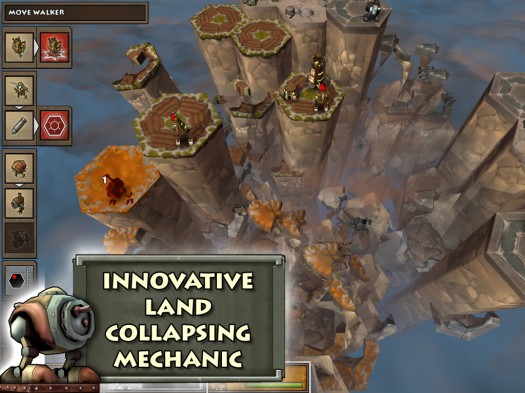 Greed Corp is initially overwhelming, so it’s for the best that the single player content starts off slowly. The first few maps are slow and the beginner AI is pretty incompetent. This gives you the chance to practice the concepts you picked up in the tutorial, which you better have played before launching into the campaign. There are only a handful of units in the game, but without a basic understanding of how to use them, you won’t survive for long.

Harvesters trigger at the start of your turn, dropping themselves and every hex of land around them by one level and giving you gold for the land they destroy. Eventually that land will collapse. Walkers can claim hexes and attack other units, defeating them on a one to one basis. Armories let you build new walkers, cannons fire at enemy hexes, and carriers can lift your isolated units out to the enemy.

Everything is costly, and resources are scarce, so you’ll need to make trade-offs. Do you harvest your land, collapsing it as you go in order to afford to fight? Or do you preserve your land, but in doing so fail to defend your troops? If three corporations set out to claim every bit of land and damn the cost, one pacifist on the board won’t last long. No matter your politics, you’ll have to buy into greed eventually. 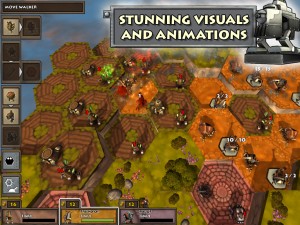 Greed Corp’s battles are lovely to look at. Though the environments are often bleak, it’s a visual feast to watch them crumble away to dust. As they do, the battlefield becomes more and more isolating until each team stands alone on tiny islands in the sky. Or maybe not — depending on your choices, battles can go many different ways. Directly charging your enemies may be the best call at times, but waiting and letting them destroy each other can be just as effective.

This is the sort of game best played with time and attention. It’s long and challenging, with 24 single-player levels divided between the four corporations. The battles themselves are quite time consuming. You have to watch as each of the CPU teams take their turns — they’re not especially slow about it, but any time spent out of control can drag on. Greed Corp is worth the time, though, with a thoughtful storyline and clever gameplay.

I can’t comment on the online multiplayer, unfortunately. During my time with the game I wasn’t able to connect to a single other player. Hopefully this will improve as the player base grows. Greed Corp allows you to set up a multiplayer game and wait for matchmaking while you play single-player, so if you want to find a game your best bet is to start matchmaking at the beginning of your play session.

But if you have someone local to play with, you don’t need to wait for strangers to join you. Multiplayer games can be set up with any combination of single-device local, online and CPU players. The one thing you can’t do is play online with friends with any reliability — the game uses its own matchmaking service rather than Game Center, and there’s no friends list.

The exclusion of Game Center is mystifying, actually. Greed Corp includes 12 achievements and 4 leaderboards, but all of them are local. Even more worrying are the bugs I encountered while playing. There weren’t many, but one resulted in a couple losses that shouldn’t have happened, and one had the game crashing every time I rotated my device (the system-wide rotation lock will let you avoid that if it happens to you). These flaws stand out in a port that’s otherwise very well done.

Still, I’d recommend Greed Corp — flaws and all. It’s a strategy board game that feels right at home on iPad, and it outdoes much of its competition on the platform. I wouldn’t get it solely for online multiplayer, but with a vast single-player campaign and support for up to four local players, it’s a gem of a game for any other purpose. If you’re on the fence, swing by our discussion thread for more opinions, but they’re mostly glowing. Rightfully so. For a game that drags you into despicably greedy behavior, Greed Corp HD is gorgeous, well designed and fun.