I don’t think I give Chair enough credit. Not only did it make a good game in Infinity Blade [$5.99], but it also created an entire mobile game structure and set of mechanics that has caught fire with both developers and mobile game fans. There are good reasons, too: the instance-based conflicts, progression, repetition are perfectly bite-sized for mobile and tablet play and visuals, while the over-the-shoulder slide, tap, and swipe controls are undeniably touch intuitive.

This didn’t hit me in a vacuum, by the way. I just spent a couple of hours with Uppercut Game‘s Epoch and describing the way Infinity Blade gets down is the easiest way to start a conversation about Epoch. Sure Epoch is cover-based shooter based in a broken-down sci-fi world populated by robots, but on a finer level it takes and adapts a lot of what made Infinity Blade so great and applies it to its own action model and structure.

The proof of what this does for Epoch is in its pudding: the game’s top-notch visuals are allowed to look great all the time, while the core play consistently stays fun and intuitive. It doesn’t hurt to mention that it has the breeziness to make it possible to play on-the-go, but I don’t think many of us will be able to put it down as quickly as our loved ones would like. 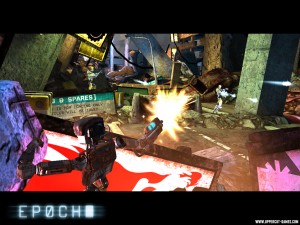 Epoch is a “guided experience," meaning exploration is a no-no. Actually, you’ll never be allowed to leave its bread-and-butter, the cover you’ll need to sit behind to take out foes. That’s because the entire game’s action model, and the fun you can have, hinges solely around sliding, jumping, and shooting, and positioning around cover objects.

It sounds like a bummer on the surface, but Epoch doesn’t suffer from this decision. Swiping to move from piece of cover to piece of cover is a fairly smooth and excitingly kinetic experience. You move fast with flair and there’s some variety to it. Different enemies with different kinds of guns are constantly challenging your choice of barrier. Some enemies, for example, can shoot timed grenades, while others a steady stream that can clip through a barricade as if it didn’t exist, forcing you to jump over the wide beam. It’s really fun to play with the cover system, which is an unusual sentiment since guns are involved.

But while shooting takes a little bit of a back seat due to the more action-oriented style of the cover part of the equation, shoot you will. Epoch is seperated into insance-based fights, all of which are gated by kills. Swipe to move from cover, tap to target. Shooting is automatic once you target an enemy, but you never feel out of control. Your robot dude only shoots when you put it in a position to do so. If he’s shooting like a moron, it’s always because you are making stupid tactical approaches. 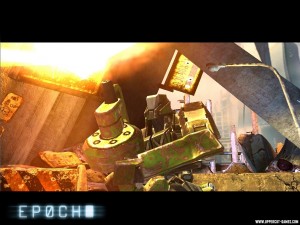 Speaking of robots, Epoch takes place in some bizarro future where machines may or may not have had an uprising of some sort. Every area I’ve seen in the game so far has been ultra-bombed out, while every robotic enemy has seemed to have been made purely to kill any opposition that swings its way. To be fair, the robot protagonist you play as seems to have been tuned in the same fashion, but your dude has a mission: find a princess — at least, I think that’s the mission.

The story-telling in particular in Epoch may not be the greatest thing ever, but I love the approach. Uppercut Game’s isn’t telling you much. Your robot doesn’t talk and you’re just exploring a world in which, obviously, something has gone horribly awry. To piece events together, the game dishes out optional diaries and messages from important people to the game world’s civilization.

The lack of story cut-scenes keeps action clippy, and it’s obvious that this is the kind of game that wants you to keep re-doing missions before going to the new ones. Your robot can upgrade its gun through an in-game store with credits earned after battle. There’s also a basic level-up system and a host of upgradeable special moves you can deploy in battle, including armor, missile, and grenade abilities. These in particular are cool, as they operate as crowd-clearing mechanisms and factor into the overall strategy. And, as I’ve discovered, you get pretty wrapped up in upgrading everything you possibly can.

Epoch does enough via its weapon systems and cover-based action to make it play and feel like a different game. And that game part, taken outside of the structure, seems to be pretty good. There’s a lot of Infinity Blade mixed into it, too. The controls, the game’s focus on repetition for better loot, its entire presentation, and a lot of its systems are undoubtedly influenced directly by Chair’s work. I’m not sure if this formula and structure are wearing on you yet, but if it’s not, you’ll probably want to check this one out when it launches. According to Uppercut, expect it soon.