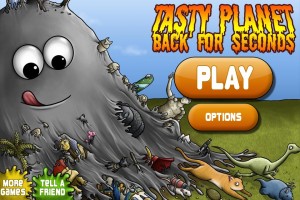 This past May, developer Dingo Games brought Laser Dolphin [$2.99/HD] to the App Store, a game that wins all sorts of brownie points from me just based on the name alone. However, before that the developer had released another iOS game that actually proved to be quite popular in an under the radar sort of way. It was called Tasty Planet [$2.99/Lite/HD], and the best way I could describe it would be if Katamari Damacy and Spore Origins [99¢] had a gooey grey baby.

As the story goes in Tasty Planet, one day an enterprising scientist was looking to create a more efficient way to clean. He creates a microbial speck of grey goo that he hopes will feast on dirt and grime, but it turns out it has more of a hunger for anything and everything. Naturally the goo gets set free into the wild, and the game follows its journey through different locations as it grows larger and larger by eating everything in sight.

Dingo Games has sent word that they’re readying an iOS port of the sequel to Tasty Planet, which is called Tasty Planet: Back for Seconds. The scientist has recklessly created another goo, and once again it gets free. This time though, the goo grows large enough to chomp down on the scientist’s latest creation, a time machine, and proceeds to travel throughout history chowing down on everything it can. 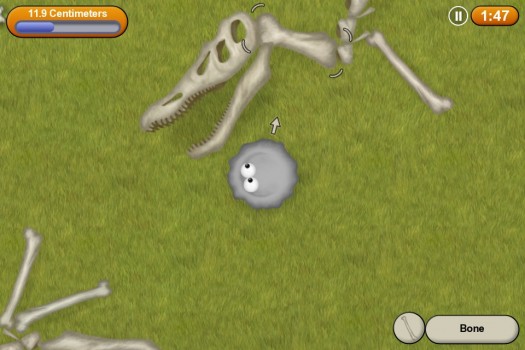 I’ve been playing through a preview copy of Tasty Planet: Back for Seconds, and if you were a fan of the first game then you’ll feel right at home with this new one. The biggest change, aside from improved visuals, is the new dynamic level structures. In the first game, you would start out small and would go to town eating the small objects around you, eventually graduating to larger objects as you increased in size. Once a level was complete, you’d move on to the next one, which typically featured the previously large objects as your starter food, with even bigger objects entering the fray after that.

In Back for Seconds, this is still pretty much the formula, but the levels change dynamically as you grow. So for example, in the first level you’ll start out as a tiny goo, eating little candies and other small items on the desk in the scientist’s laboratory. Once you grow large enough, the view will zoom out and you’ll begin eating larger objects and eventually graduate to objects on the floor. Once you become big enough, you’ll gobble up the time machine in the lab which will set off your time traveling journey.

The dynamic level changing softens the linear progression that was in the first game, and makes it feel more like you’re an actual goo who is constantly growing larger with every meal. While both Tasty Planet games are not much more than simple avoidance/collection games at their core, it’s the environments in the games that really make them fun. In the same way that I used to love playing the Micro Machines games and racing around a track lined with pencils, staplers, and paper clips, it’s just fun to start out in the tiny worlds of Tasty Planet and eventually grow your way into scarfing down large animals, cars, trees, and even dinosaurs. And from what I’ve played so far, Back for Seconds does this aspect even better than the original game did.

Another thing worth noting is that Tasty Planet utilizes several control options. The default is tilt controls, but as I’m not typically a big fan of those I appreciate that there’s several other touch control options. Also, there’s a good amount of variety to the missions beyond just eating larger and larger items, like eating a certain number of items within a time limit or negotiating mazes to collect specific items. Don’t get me wrong, the majority of the game is mindless arcade-style fun, but it’s nice to break up the gameplay now and then with these sorts of elements, and I’m looking forward to digging even deeper into this sequel to see what other kinds of things are waiting for me.

Tasty Planet: Back for Seconds seems to be in a fairly complete state, so should hopefully be releasing in the not too distant future. We’ll have another look at the final product when it eventually hits the App Store.